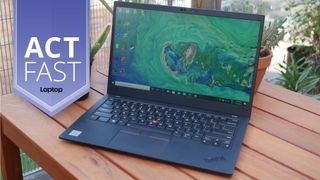 This weekend's Lenovo ThinkPad clearance sale takes up to $1,639 off its best business laptops. Here's your chance to score a solid deal on some of our top-rated notebooks.

As part of the sale, you can get the excellent Lenovo ThinkPad X1 Carbon Gen 8 for $1,258 via coupon"CLEARANCE8". That's a whopping $1,021 off and the lowest price we've ever seen for this premium laptop.

These are some of the best laptops deals we've seen all year.

The Lenovo ThinkPad X1 Carbon Gen 8 is one of the best laptops of 2020.

In our Lenovo ThinkPad X1 Carbon Gen 8 review, we loved its slim, lightweight design and bright, vibrant 1080p display. We gave it the Editor's Choice award for its fast performance and class-leading keyboard.

The new Carbon X1 Gen 8 looks identical to the Carbon X1 Gen 7. It maintains the same sleek shape and stealthy finish as its predecessor. Just about the only difference is that there's an "X1" stamp under the iconic ThinkPad logo. Reinforced with carbon fiber, the laptop's military-grade durability withstands high altitudes, subzero temperatures, drops and spills.

Security-wise, the Carbon X1 Gen 8 features a dTPM 2.0 chip to ensure sensitive data is encrypted before being transmitted. It also has a ThinkShutter webcam cover, an integrated fingerprint sensor, and an IR camera for Windows Hello login.

For an ultraportable laptop, the ThinkPad X1 Carbon Gen 8 has a generous assortment of ports. It's equipped with two Thunderbolt 3 ports, two USB 3.1 ports, and an HDMI 1.4 input. There's also a lock slot and headphone/mic jack combo on board.

Now $1,021 off, the 8th Gen ThinkPad X1 Carbon notebook is an incredible value.