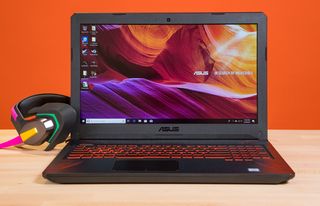 Pre-Black Friday gaming laptop deals have been rolling out all week and that's good news for consumers with tight budgets. That's because now is the perfect time to snag yourself a cheap gaming laptop.

Best Buy, for example, has the Asus TUF FX505 15.6-inch Gaming Laptop on sale for $579.99. Traditionally, this laptop retails for $849.99, so that's a $270 markdown from its regular price. It's the lowest price we've ever seen for this gaming laptop and one the best best Black Friday deals right now.

Although we didn't review this model, we reviewed its affordable sibling. In our Asus TUF FX504 review, we were impressed by its good gaming performance for the price, solid audio, and cooling system. Although we thought its battery life could be better, we rated it 3 out of 5 stars for its overall solid performance and sound.

In terms of design, the TUF FX505 GTX 1650 gaming laptop looks almost identical to the TUF FX504. It's exterior is made hard plastic, accented with faux-aluminum brushing. There's also a reflective Asus logo on its lid for a little razzle dazzle. The only difference is that the TUF FX505 doesn't have the red, angular lined patterned lid design.

Overall, the TUF FX505 GTX 1650 gaming laptop by Asus delivers ample power for even the most demanding workloads and games.

For more deals like this, be sure to bookmark our best Black Friday laptop deals and Cyber Monday deals pages.