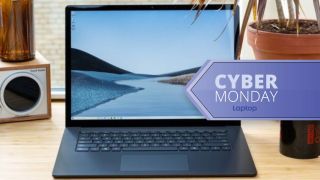 Microsoft's Surface Laptop 3 was one of the hottest products of Black Friday, and is still going strong for Cyber Monday thanks to some killer Surface deals.

Amazon is selling the Microsoft Surface Laptop 3 for $350 off, which knocks the 13.5-inch model with a 256GB SSD down to $950 after you use an on-screen coupon. That's the lowest price we've seen for the Surface Laptop 3 (tied for Black Friday), a premium device Microsoft released just a few weeks ago.

Furthermore, the 13-inch and 15-inch models are on sale for $300 off at Microsoft's online store. What we love about this deal is that it applies to different configurations and color variants of the Surface Laptop 3, so you can buy the one that best fits your needs.

In our Surface Laptop 3 review, we gave the 15-inch a recommended rating for its slim, premium design and gorgeous display. While its AMD processors aren't the fastest, you shouldn't have any problems running multiple web tabs, streaming videos or even downloading large files.

With its slim design and large display, the Surface Laptop 3 is a great choice for business users and students who need to maximize productivity but want an ultra-portable laptop.

Before you add anything to your cart, see our which Surface is right for you? guide for a deeper breakdown of Microsoft's PCs.

The Surface Laptop 3 was released just a few weeks ago, so we expect some configurations to sell out fairly quickly.