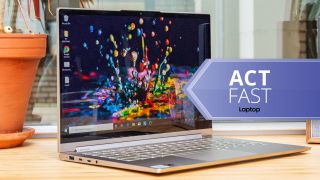 Lenovo's Yoga C940 2-in-1 is one of the best laptops around. So if you're in the market for a portable PC that can shape-shift from laptop to tablet on the fly, check this Lenovo deal out.

In our lab, the Yoga C940 scored 18,709 on the Geekbench 4.3's overall PC performance test which beats the premium laptop average of 16,314. To gauge its multitasking performance, we opened up 20 Google Chrome tabs — four of which were playing 1080p YouTube videos — and the Yoga C940 showed no signs of lag.

Connectivity-wise, the Yoga C940 packs two Thunderbolt 3 ports, a USB Type-A port and a headphone/mic jack combo. So if you're in the market for a versatile 2-in-1 laptop, the Yoga C940 fits the bill. This deal ends February 23, so we recommend you act fast.