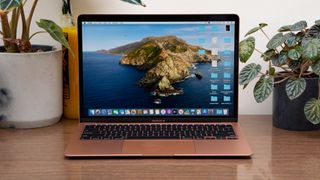 Mac users that have upgraded to the recent macOS Catalina 10.15.4 update are reporting a variety of issues with the most prominent being a system crash brought about by large file transfers (via MacRumors).

Some of the other issues appear to relate to macOS attempting to sleep or wake from sleep with varied results depending on the system conditions and connected hardware.

The most significant problem appears to be affecting those that are attempting large file transfers (30GB or more). This issue has been documented in the SoftRAID forums and the company has filed a bug report with Apple.

Here's an excerpt of a forum post from the SoftRAID support team explaining the issue:

"It shows up in different scenarios, even on Apple disks but is more likely when there are lots of IO threads. We think it is a threading issue. So while SoftRAID volumes are hit the hardest (its now hard to copy more than 30GB of data at a time), all systems are impacted by this.

In our bug report to Apple, we used a method to reproduce the problem with ONLY Apple formatted disks. Takes longer to reproduce, but that is more likely to get a faster fix to the user base.

I hope Apple will get a 10.15.5 out quickly to fix this. Except for downgrading with a previously downloaded installed, it is very hard. (Time Machine is broken where "Snapshots" were not working, so the magic "go back" is not working)."

The other set of problems are both related to sleep issues on macOS 10.15.4 with some individuals simply reporting immediate kernel panics upon waking their computer from sleep with a reboot to the Apple logo.

And in a similar vein, those with external hard drives connected to their sleeping Mac are seeing odd behavior with drives spinning up and down without cause.

The severity of some of these bugs should offer users hope that a quick fix may be forthcoming from Apple, but the company has yet to acknowledge the issues or provide a timetable for a new update.