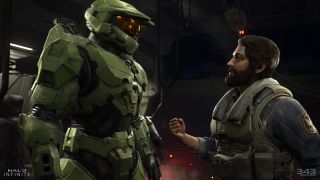 Halo Infinite's gameplay demo was revealed last week, and after backlash on Twitter about the game's underwhelming visuals, it seems 343 Industries is perfectly aware of the issues and intends to address them over time.

343 Industries' Community Manager, John Junyszek, published a blog post on Halo Waypoint that illuminates a few things, including why the game looks the way it does and how the company will go about fixing these problems.

Before getting into the nitty-gritty of why the game looked underwhelming, the blog post quickly dives into Halo Infinite's art direction. Junyszek writes, "we decided to shift back towards the legacy aesthetics that defined the original trilogy. With Halo Infinite, we’re returning to a more ‘classic’ art style."

This decision has clearly resonated with certain fans, as people like Tim Gettys, the co-founder of Kinda Funny, have tweeted about how art style is far more important than graphics.

However, even though the game's visual direction is being praised, it's quite clear that Halo Infinite harbors quite a few graphical issues. Digital Foundry's video on it goes over all the reasons quite well, showcasing that it primarily has to do with poor lighting.

343 Industries has even acknowledged that the game's graphical fidelity could use some improving. "We’ve read your comments" and "yes we’ve heard the Digital Foundry assessments." Junyszek goes on, "In many ways we are in agreement here – we do have work to do to address some of these areas and raise the level of fidelity and overall presentation for the final game."

He goes on to explain that the demo they showcased was one from "several weeks ago" and that many aspects of the game are still being "finished and polished." Much of the feedback 343 Industries received after they premiered Halo Infinite's demo spoke to "areas already in progress," but some of it brought "considerations to light that the team is taking very seriously."

Although the development team seems hard at work addressing these issues, they "don’t have firm answers or outcomes to share yet." However, Junyszek assures players that "the team is committed and focused on making sure we have a beautiful world for players to explore when we launch."