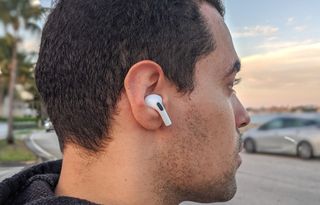 Did you know that famed composer Ludwig Van Beethoven, beloved for his harmonious symphonies, suffered hearing loss in his mid-40s? But that didn't stop the brilliant pianist from writing music.

Beethoven clenched a rod between his teeth and placed the other end on his piano. This way, he could bypass his uncooperative eardrums and hear music through his jawbone. This technique is called bone conduction -- and Apple may apply Beethoven's ingenious technique to future AirPods, AppleInsider reported.

Apple is well aware that we can hear sounds through two mediums: our eardrums (air transmission) and bones. According to a new patent, Apple is zooming on in the latter -- bone-conduction technology -- to best hit our auditory systems in the feels while listening to music on our AirPods.

However, there are some hindrances with bone conduction that air-conducted sound does not have. Firstly, human hearing has a 20 Hertz to 20,000 Hz range, but bone conduction is only effective at or below 4,000Hz. Anything above that causes audio-quality deteroriation.

Secondly, because bone-conduction audio technology requires contact with the head, it can tickle users at higher intensities, which can make headphones uncomfortable.

But don't worry. Apple has discovered a solution to these issues with a process called "multipath audio stimulation using audio compressors." In other words, Apple has a vision about incorporating both bone-conduction and air-transmission technology to develop dynamic, melodic and tuneful sounds for future AirPods.

Audio signals are filtered into three categories: lows, mids and highs. The patent explained that Apple has conceptualized a device that can direct lows and mids to users' skulls -- this is where bone-conduction technology will shine. High-frequency components, on the other hand, will be sent to the eardrum.

As a result, audiophiles will get to enjoy an immersive music experience as sounds permeate through two audio-system channels: their bones and eardrums. That sounds lovely, doesn't it? (Pun intended.)

The concept of stimulating both one's bones and eardrums with music sounds is titillating -- we hope Apple takes the leap and incorporates bone-conduction technology for future iterations of Apple AirPods.