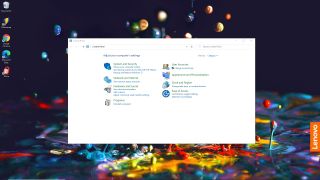 Since Windows 1.0, the Control Panel has served as a collection of applets to change and view a variety of system settings, but this could finally change in a future Windows 10 update (via Windows Latest).

References in current Windows 10 preview builds indicate the Control Panel may be hidden in upcoming releases and potentially removed entirely in the future.

Specifically, there are code references to 'Hide_System_Control_Panel' and 'SystemToAboutSettingsSearchRemoval,' which point to hiding the Control Panel from even a search, one of the common methods for bringing it up today.

The move to ditch the Control Panel in favor of the Settings screen wouldn't come as a surprise. It would offer greater clarity for users that are faced with confusion over where a given setting can be found, exacerbated by the fact that there is still some overlap between the two.

Far more surprising is that these two have coexisted for this long, it was one of our 8 biggest annoyances with Windows 8 when it launched all the way back in 2012. Microsoft has made it increasingly difficult to find the Control Panel over the last few years, requiring a search or digging through a series of menus. That said, the writing has been on the wall for some time now.

It's possible this will come along with the rest of the massive Windows 10 UI overhaul expected for later this year and it would certainly be in keeping with the more unified UI and UX that Microsoft highlighted with its video overview.