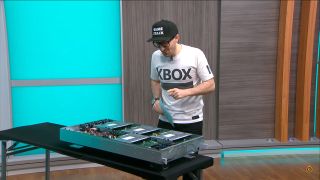 Project xCloud's big, beautiful guts were splattered all over a table for all of us to gawk at during Game Stack Live, a two-day, livestreamed Xbox event to unpack the gaming giant's upcoming projects.

By "guts", we're referring to Microsoft's unveiling of the cloud-gaming platform Project xCloud -- in the flesh -- as a server blade. The Game Stack Live host gushed as he delved into how Project xCloud is hosted within the global data centers of Microsoft Azure.

"It's so cool to take a look at the guts of this thing!" the Game Stacks Live host said, and we agree. "The tech that went into the making of this thing is unbelievably impressive."

The server blade consists of deconstructed Xbox One console hardware, according to Build5Nines, so this badass machine is Xbox One's guts stuffed within Project xCloud's guts.

This hypnotizing slice of Project xCloud is, in part, responsible for powering the cloud platform, which is currently helping gamers' stream their favorite Xbox games on their smartphones and tablets with xCloud's preview plan. "But what about PC?" you may be wondering. Don't worry, Project xCloud is headed to Windows, too, in late 2020.

As Project xCloud moves to add PCs to their network, game developers around the world must have collectively released a sigh of relief when the Project xCloud team explained that they wouldn't have to re-write their games to be compatible with other devices in the video-game streaming service.

"With Project xCloud, we're doing what we call 'Lift and Shift,' which is taking existing games that we've already designed and built for Xbox, and being able to run them in the cloud with the title not even being aware that it's running in a remote-data center," said John Ronald, Xbox's Director of Program Management.

That doesn't mean, though, that developers can't take extra steps to better optimize their games for the cloud.

"Maybe I originally designed my HUD or UI for a 10-foot user experience on a large screen TV, but when I'm actually streaming to a mobile device, maybe I need to increase the font size to make it more legible," Ronald added.

Game Stack Live also dug deep into the immersive gaming experience that Project xCloud users can expect with the video-game streaming service. The virtual world and characters of today's premium games may look real, but they may not act real -- and that's where Project xCloud and Xbox Series X steps in to create a more physics-friendly experience that diminishes awkward character movements and unnatural, environmental actions.

"The fastest way to make a developer laugh, as a designer, is going into a room and telling them that you want to build a scene where you're fighting in water and everything reacts dynamically," Head of Xbox Design Studio Chris Novak said. "They're like, 'Yeah, we can't do the physics for that.'"

A badass, wet battle scene would require a super-powerful CPU, according to Novak, insinuating that Xbox Series X and Project xCloud is equipped to handle such an intense spectacle. Xbox Series X, by the way, is powered by custom-designed, Zen 2 AMD architecture.

Project xCloud team highlighted that the video game streaming platform is all about giving gamers choices. Lugging a big ol' console isn't convenient, but being able to continue one's gameplay on more portable devices certainly is.

We reached out to the Project xCloud team to find out more about their road to video-game streaming on PC, but they were hush-hush about the journey.

"We’re excited about the future of Project xCloud and we’re looking forward to bringing the preview to Windows 10 PCs this year. We have nothing further to share at this time," a Microsoft spokesperson told us.