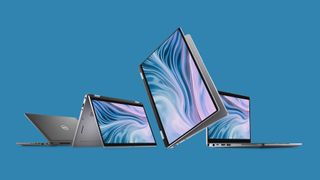 Dell has unveiled five new members of its Latitude series of business laptops today. Starting with the detachable 12.3-inch Latitude 7210 along with its 13-inch and 14-inch siblings, the 7310 and 7410, and at the top end are two battery life powerhouses in the Latitude 9410 and 9510.

With the exception of the Latitude 7210, all of these laptops can be configured as either a 2-in-1 or a traditional clamshell laptop, depending on your preference. Dell is looking to set the mark with these laptops as the thinnest and lightest available in their class.

The design of the 9410 and the 9510 is reminiscent of a slimmed-down version of the new Dell XPS lineup, although the machined aluminum exterior is a few shades darker than the XPS. Inside, both laptops are running Intel 10th-Gen Comet Lake processors -- up to a Core i7 with vPro, 16GB of RAM and Intel UHD graphics. Storage options range from a 256GB SSD up to 1TB SSD on the 9410 and up to 2TB on the 9510.

Ports are plentiful on both the Latitude 9410 and 9510; The only discrepancy between the two is that the 9410 offers two USB Type 3.1 Type-A ports, while the 9510 has just one. Otherwise, both have two Thunderbolt 3 ports, one HDMI 2.0 port, an SD card reader, and a number of optional add-ons, including a sim tray (for 5G), a Smart Card reader, and a fingerprint reader in the power button. Those looking for huge battery life figures, you'll need to skip out on the Smart Card.

Lastly, both laptops include Wi-Fi 6 and optional support for 5G via the Qualcomm Snapdragon X55 Modem, although that will not be available until July. The Latitude 9510 is available now and starts at $1,899.

Turning to the 7000-series the Latitude 7210 is the smallest model, at 12.3-inches, and is alone among these new laptops in offering a detachable form factor to serve as a tablet with a built-in kickstand like the Surface Pro 7. Like the Surface, the keyboard is sold separately. The tablet itself is 11.5 x 8.2 x 0.4-inches and 1.9 pounds while adding the keyboard takes that up to 11.5 x 8.9 x 0.61-inches and 2.6 pounds.

Inside is a 6-core, Intel 10th-Gen processor with up to an i7 with vPro and Intel UHD graphics 620 with up to 16GB of RAM. Storage options go from 256GB up to a 1TB SSDs. The display is a more tablet-friendly 3:2 orientation at 1920 x 1280-pixel and, of course, supports touch and active pen input.

Ports are pretty impressive for a device this size, and include two Thunderbolt 3 ports, one USB Type-A, one SD card reader, a headphone/mic jack, and optional add-ons like a fingerprint reader, SIM card tray and Smart Card reader.

The Dell Latitude 7310 and 7410 are virtually identical in every way with the exception of screen size; The 7310 comes in at 13.3-inches and the 7410 at 14-inches. Both laptops offer 1080p for most configurations, including the 2-in-1 and clamshell options, while the 7410 gets a high-end 4K variant with low blue light to reduce eye strain.

Inside, both laptops feature an Intel 10th Gen Comet Lake processor --- up to i7 with vPro, Intel UHD graphics, and up to 32GB of RAM. Storage options range from 512GB up to 1TB.

Ports are identical with one exception: the 7410 offers two USB Type-A ports, while the 9510 has just one. Otherwise, both have two Thunderbolt 3 ports, one HDMI 2.0 port, an SD card reader and a number of optional add-ons including, a SIM tray, Smart Card reader, and a fingerprint reader in the power button.

Wi-Fi 6 support is available and up to LTE via the optional Qualcomm Snapdragon X20, but for 5G you'll need to stick to the 9000 series.