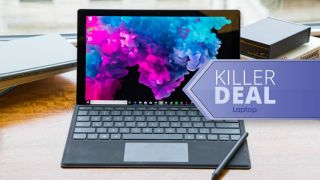 It's no longer Microsoft's flagship 2-in-1, but the Surface Pro 6 is still an excellent hybrid and in some ways better than its successor. Especially now that it's on sale.

Amazon has the Microsoft Surface Pro 6 with Type Cover on sale for $779. This bundle normally sells for $1,329, so that's a generous $550 off its regular price. It's one of the best laptop deals we've seen this month.

Surface Pro 6 w/ Type Cover: was $1,328 now $779 @ Amazon
For a limited time, the Surface Pro 6 with Type Cover keyboard is on sale for $779. The Surface Pro 6 is better than its successor in that it packs a longer battery life and more vivid screen. This specific model has a Core i5 CPU, 8GB of RAM, and a 256GB SSD.View Deal

The Surface Pro 6 has the same light and portable build as its successors, the Surface Pro 7 and Surface Pro X. Its versatile 2-in-1 design lets you easily configure it into any of three modes: tablet, laptop or studio. At 0.33-inches thin and 1.7 pounds (2.4 pound with the keyboard), the Surface Pro may be svelte, but it's sturdy and stable.

In real world tests, we found its display remarkably bright and colorful while streaming a movie. Even when we opened 28 tabs open in Chrome with Spotify and Netflix streaming in the background, the Surface Pro 6 never slowed down.

In our lab the Surface Pro 6 notch an overall score of 13,025 in Geekbench 4 performance tests. And in our battery test, it went this distance of 9 hours and 20 minutes which is 1.5 hours longer than the Surface Pro 7's battery life.

As for ports, the Surface Pro 6 has a Surface Connect port, a USB 3.0 port, a mini DisplayPort, a headphone jack and a microSD slot.