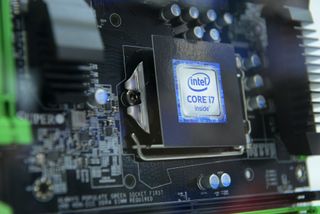 Intel's difficult year just got a lot worse. The semiconductor revealed on Thursday that its upcoming 7-nanometer chips would be delayed at least six months, and are now expected to arrive in late 2022 or early 2023.

It's more bad news after Apple revealed that it would ditch Intel to make its own ARM-based chips for MacBooks. To make matters worse, AMD has caught up and even surpassed Intel on mobile after lagging behind for the better part of a decade.

Intel decided to push back its initial production shipments of 7nm CPUs after identifying a "defect mode" in its chipmaking process that led to yield degradation, Intel CEO Bob Swan said in an earnings call (via Tom's Hardware).

"We've root caused the issue, and believe there are no fundamental roadblocks," Swan said. "But we've also invested in contingency plans to hedge against further schedule uncertainty. We've mitigated the impact of the process delay on our product schedule by leveraging improvements in design methodology, such as die disaggregation and advanced packaging."

Despite announcing that it had topped Wall Street expectations for the quarter, Intel's stock dropped 10% after news of its production issues. If Intel can't get on the right path on its own, it might consider turning to help from third parties, or what Swan calls "contingency plans."

With 7nm chips getting delayed, Intel's Tiger Lake chips (10nm+) will now be tasked to hold off a revitalized AMD. The upcoming CPU has underwhelmed in leaked benchmarks, but we'll hold our judgment until Intel is finished tinkering with the chips to optimize performance.

One area we expect to see significant improvements in is with the integrated graphics. The current 10nm Ice Lake chips raised the bar for Intel with Iris Plus graphics but the Xe graphics in Tiger Lake should be an even bigger step up. Intel has indicated that Xe is twice as powerful as Iris Plus and capable of playing Battlefield V (1080p resolution) at 30 frames per second.

What this means for Intel (and your next laptop)

We already knew it would be an uphill battle for Intel after CFO George Davis candidly revealed that upcoming 10nm chips wouldn't be very impressive and that we'd need to wait for 7nm for a much-needed performance boost.

While Intel comes up with a solution to more efficiently shrink its die size, AMD is expected to move to 5nm in 2021, before Intel can even reach 7nm. With AMD edging forward without any signs of slowing down, and Intel stuck in place, all signs point to a changing of the guard. The question is: will laptop vendors abandon Intel for AMD? And if they do, how will consumers respond?