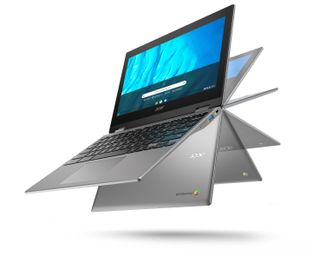 Acer is on a roll this year, especially with its buzzworthy AMD-powered Swift 3 that bested the Dell XPS 13 in performance. The Taiwan-based laptop maker is continuing the momentum by releasing a pair of Chromebooks.

If you're a student seeking a productivity laptop that won't have your wallet wincing in pain, you'll love the Chromebook Spin 311. But if you're on the hunt for something more premium with cutting edge hardware, the Chromebook Spin 713 is the best option for you.

The Chromebook Spin 311 will be kind to your pockets with a sweet price tag of $259.99, and it will be available in July.

The premium Chromebook Spin 713, on the other hand, will set you back $629.99. You can also snag a 713 model with Chrome Enterprise, which costs $1,099. The former will hit store shelves in July while the latter will be available sometime in August.

The Acer Chromebook Spin 311, sporting an 11.6-inch display, lives up to its name with a convertible design that can transform into a tablet, get propped on a table for presentations and visual entertainment, or be used traditionally as a clamshell laptop.

The Spin 311 is perfect for students seeking a compact, flexible notebook that can handle web browsing, word processing and productivity applications. This Chromebook is powered by a Mediatek MT8183 CPU and it promises up to 15 hours of battery life, which we can't wait to verify when we test it in our labs.

Weighing just two pounds, the Acer Chromebook Spin 311 is a lightweight device that can smoothly slip into a student's backpack as they glide from class to class with ease thanks to the featherlike Chromebook.

Students, of course, aren't the only ones who can enjoy this sub-$300 laptop. Anyone seeking a productivity notebook with access to Android apps will likely appreciate the Acer Chromebook Spin 311.

The Acer Chromebook Spin 713 will come in two models. One configuration is a business-grade Chromebook with Chrome Enterprise that is equipped with perks, such as easy fleet management and proactive security systems. The other model is a standard, consumer-friendly ChromeOS laptop.

Both are powered with the latest 10th Gen Intel Core processors and they're Project Athena-verified. Project Athena verification, by the way, is a new industry benchmark that rigorously tests whether a laptop can provide a high-satisfaction experience for all users. The Chromebook Spin 713, alongside other top-tier laptops, such as the Dell XPS 13, got the thumbs up from Project Athena as being a solid laptop for barometers such as battery life and responsiveness.

Equipped with 16GB of RAM and a 256GB SSD, the Acer Chromebook Spin 713 offers 10 hours of battery life as well as a 13.5-inch display with a 2256 x 1504 resolution. Acer noted that the Spin 713 sports a screen with a VertiView display, which means you'll get 18% more vertical screen space than your average laptop.

Durability is another alluring feature of the Spin 713. The touchscreen and the touchpad are both made of Gorilla Glass, which means they're resistant to scratches and can provide smooth-sailing navigation. The Chromebook Spin 713 also boasts military-grade durability and can endure high-impact shocks.

So if you're clumsy like me, your Chromebook won't smash to smithereens with a simple drop.

The Acer Chromebook Spin 713 also has a decent stock of modern and legacy ports, including two USB 3.1 Type-C ports, an HDMI port, USB 3.0 and a microSD card reader.

Like the Spin 311, the Chromebook 713 can transform into different modes, including tablet mode, thanks to its 360-degree hinge.

Users of the Spin 311 and Spin 713 can both enjoy their favorite Android apps on their Chromebooks via the Google Play Store. If you're an Android lover and you are a heavy user of Google apps, including Docs, Gmail and YouTube, you should get the Spin 713 if you've got some money to blow. But if you've got a modest budget, the Spin 311 would be the best option for you.