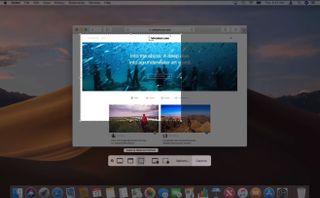 Mac screenshots taken in macOS are one of the easiest yet most useful tools MacBook users can have in their arsenal.  Whether you're saving something for later or sending a friend something you saw while browsing the web, Mac screenshots are a great way of quickly relaying information.

How to take a screenshot on your entire macOS desktop

The easiest way to capture a full screenshot of the entire macOS desktop is by using a nifty keyboard combination.

Follow the steps below to take a full-screen screenshot on your MacBook:

How to take a partial screenshot in macOS

If you don't need to capture everything on your screen, you can take a partial screenshot of a picture, block of text, or whatever it is you want to grab. With this method, you can save time by cropping as you capture instead of editing afterward.

Follow the steps below to take a cropped screenshot on your MacBook:

How to screenshot object in macOS

If you want to go even more granular, you can take a screenshot of a specific object, window or menu. This way, you can get an exact snippet of what you want to save on the screen without doing it manually and the risk of cutting pieces off.

Below are the steps to capturing an object, window or menu with a screenshot:

How to take a manual screenshot with the macOS Screenshot app

The latest editions of macOS let you take a manual screenshot with the aptly-named application, Screenshot. Added to macOS Mojave, Screenshot gives you various capture options, including full screen, a portion of the screen, or a manual click-and-drag selection.

You can even record your screen from this app and choose where files save so you don't lose them later.

Here is how to use the Screenshot app to capture objects in macOS: