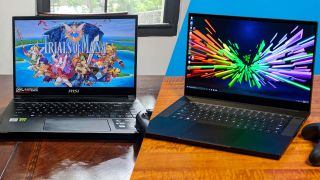 I love face-offs like this! It’s a battle of gaming laptops, but not just gaming notebooks, these are thin-and-light systems. It’s a delicate balance between performance and endurance that’s definitely fun to watch. In one corner, we have the MSI GS66 Stealth, the company’s latest slim stunner that’s rocking a 10th Gen Intel Comet Lake H Series processor, an Nvidia Super graphics card and the biggest battery the TSA will allow on a plane. It’s also the latest member of the 4.5-star club on Laptop Mag.

But not to be outdone, we’ve got the Razer Blade 15. Razer ushered in the era of thin-and-light gaming laptops and has been honing its craft ever since. This particular Blade 15 is stacked with an Intel 9th Gen CPU, Nvidia RTX 2080 Max-Q GPU and an absolutely tantalizing 4K OLED panel. Also, keep in mind that Razer has recently refreshed the Blade 15 with 10th Gen Intel CPUs and Nvidia Super GPUs, so we'll be having round two of this face-off very soon.

So which ultra-thin powerhouse is going to take this one? Read on to find out.

Let’s play a game of who wore it better. Most Blades are made of a matte black all-aluminum chassis. The squared-off corners are retro-chic while the glowing three-headed logo in the lid screams gamer. Opening the laptop, you get more of that beautiful inky blackness that helps to accentuate the sparkling Chroma keyboard.

Razer’s been experimenting with color including the gorgeous Quartz Pink and the ridiculous Mercury White finish. Quartz Pink currently isn’t available for the Blade 15, but Mercury White is on the table for those looking for a more refined take on the notebook. Instead of the emerald green logo, the Mercury White model has an embossed silver logo that’s sleek and stylish.

And while I miss the golden accents on the Stealth, I have to admit that the notebook is just as beautiful in all black. MSI dragon emblem is done in black, drawing the observing in for a closer look. The notebook’s interior reveals more black aluminum and a pretty RGB backlit keyboard.

Despite their svelte dimensions, both notebooks have a slew of ports.  On the Stealth, you’ve got a USB Gen 3.2 Type-C port on the right along with a pair of USB 3.1 Type-A ports, an Ethernet port and a headset jack. Along the left, there’s another USB 3.1 Type-A port, a Thunderbolt 3 port, a full HDMI port and an AC jack.

The Blade 15 is also serving up the portage with a USB 3.2 Gen 2 Type-A port, a Thunderbolt 3 port, an HDMI 2.0 port, a Mini DisplayPort and a secure lock slot. On the left, you get two more Type-A ports, a headset jack and a proprietary power jack.

Is there anything more beautiful than an OLED display? When it comes to gaming laptops, the answer is a definitive no. Colors just seem to burst off the Blade’s 15.6-inch, 3840 x 2160 OLED panel with a 60Hz refresh rate. So if you want super high-res detail with incredible color (and I think you do), the Blade 15 is the way to go hands down.

On the other hand, if you’re a gamer, you value super-smooth rendering as screen latency can be the difference between you scoring a headshot or someone getting one on you. In that case, you need to consider the Stealth which has a 15.6-inch, 1920 x 1080 screen with an out-of-this 300Hz refresh rates. Gaming on this bad boy was a complete treat, combining vividness, brightness and smoothness.

When we measured color reproduction capabilities, the Blade 15 reached a whopping 243% of the sRGB color gamut compared to the Stealth’s 116%. The Blade 15’s panel averaged 438 nits while the Stealth only reached 321 nits.

It can be hard to start typing on the Blade 15’s island-style keyboard because that Chroma lighting is just so pretty to look at. The RGB lighting is incredibly bright, making it incredibly easy to see in a darkened environment. But the Stealth’s SteelSeries keyboard isn’t a slouch by any means, offering up a cornucopia of color. Both notebooks also offer preinstalled software to tweak the per-key keyboards to your liking.

If I have to choose a software, I prefer Razer’s Synapse 3.0 software as it offers more lighting presets compared to the SteelSeries Engine 3 program on the Stealth. However, each utility offers its own special features such as Synapse’s Pen feature which lets you essentially draw the light pattern you want or SteelSeries Engine’s GameSense feature, which syncs up the lighting for certain games to blink or flash when something important happens.

But a keyboard has to do more than look pretty, it also has to be comfortable to type on, which luckily for me was the case for both. When I took the 10fastfinger typing test, I reached my 70 word-per-minute average on the Blade 15 and 72 wpm on the Stealth.

MSI has outfitted the Stealth with one of Nvidia’s GeForce RTX 2080 Super Max-Q GPU with 8GB video memory. It’s one of the most powerful mobile graphics cards available. But not so fast, the Blade 15 has an RTX 2080 Max-Q GPU (with 8GB of VRAM), which makes for an interesting battle.

In order to test the laptop’s VR capabilities, we ran VRMark Blue, one of the most demanding VR tests available. The Stealth achieved 2,394, staving off the Blade 15’s 2,348.

Both laptops are equipped with an Intel UHD Graphics GPU for those times you aren’t gaming and don’t need as much oomph.

Both laptops are high performers when it comes to multitasking. The Stealth relies on its 14-nanometer 2.6-GHz Intel Core i7-10750H processor with 32GB of RAM while the Blade 15 uses an Intel Core i7-9750H CPU with 16GB of RAM to get the job done. Each laptop did great on our real-world tests so it was on to the synthetic tests to see which system would come out on top.

Gaming laptops are normally known for their notoriously short battery life. MSI is looking to remedy that problem with its 99.9 watt-hour battery. It’s the largest battery the TSA will allow on a flight. The laptop ended up lasting 6 hours and 36 minutes on the Laptop Mag battery test, outlasting the Blade 15’s time of 4:12.

However, with its show-stopping 4K OLED screen, beautiful customizable keyboard, the Razer Blade 15 shouldn’t be counted out. It also offers strong gaming capabilities as well as overall performance. And as far as battery life, the Blade 15 still has better endurance than most gaming laptops on the market.

But overall, if you want a light and powerful gaming laptop, the MSI GS66 Stealth is the way to go.