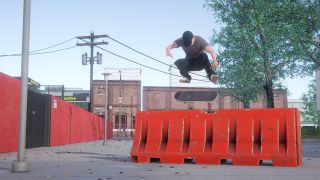 Robots and road trips, what more could you want? Red Thread’s upcoming title, Dustborn gives you that and so much more. A stylized adventure game, Dustborn centers on Pax, an outcast on the run from the law and entrusted with delivering an important package. It’s a daunting task, but as Dustborn, a person with superhuman abilities, the odds should be in
Pax’s favor. If not, she’s got a squad of people and bots with their own abilities. Either way, it’s going to be a hell of a road trip. –– Sherri L. Smith

Hotshot Racing is a nostalgic revisit to classic arcade racing games. With a focus on an insane sense of speed and incredibly tight and accurate drifting mechanics, Hotshot Racing could be an excellent competitive experience for those who have always been a fan of classic racers thanks to its charming retro graphics. Combine this with its lighthearted use of color, the game might transport you to a different era of gaming. Hotshot Racing is set to release sometime this Summer, so keep an eye out. –– Mohammad Tabari

Shiny lights and lots of death. That’s what you can expect from Roguelite Neon Abyss. Available July 14, Neon Abyss, the first title from developer Veewo Games, and puts you in the employ of Hades as part of the Grim Squad. Your mission: infiltrate the abyss and eliminate the New Gods by any means necessary. For Neon Abyss, that means plenty of big, flashy guns, cool abilities and death, lots of death. But don’t worry, every time you die, you come back a little stronger than when you began. –– Sherri L. Smith

Last Oasis is a massive multiplayer online experience about traversing throughout a diverse world and building your own mobile bases to do so. These structures seem inspired by Renaissance design and allows for the organic nature of the world to come to life. Having contraptions move without steam, metal or electricity adds to this compelling aesthetic. This unique survival game essentially allows players to live like nomads by moving their from biome to biome. If this sounds cool to you, Last Oasis is currently in early access on Steam. –– Mohammad Tabari

This game takes place as your character is stuck in a coma. It’s up to you to explore some of your most treasured memories in your dying mind while fighting for your life. If you need a hand look to your loved ones to help fight back the forces of oblivion. At its heart, Waking is a third-person, adventure game that focuses on self reflection, meditation and remembrance. I can’t wait to try it out when it launches on June 18. –– Sherri L. Smith

If you’re a big fan of the Skate series or Tony Hawk Pro Skater series, Skater XL is made for you. What’s particularly interesting about Skater XL is that there are no predetermined animations. Each flip, trick and complex movement is natural and based on the in-game physics engine. You’ll be using both analog sticks to control each foot, allowing you to pull off unique, personalized stunts that aren’t limited by what the game tells you to do. Additionally, we’ll be seeing real locations that are faithfully recreated to match reality. Skater XL is available now on Steam in early access. –– Mohammad Tabari

The Captain is Dead

Based on the popular tabletop game, The Captain is Dead is a turn-based, strategy title that puts you in the captain’s seat  after your predecessor met their untimely end. You have to protect yourself and the crew from a horde of aliens attacking the ship. Want to survive? Then you’re going to have to cooperate with the crew and combine your unique attributes to win the day. Don’t and you’ll end up like the last captain. –– Sherri L. Smith

GTTOD: Get To The Orange Door

GTTOD, otherwise known as Get To The Orange Door, is a futuristic first-person shooter with a focus on gaining high scores, speeding through levels and racking up as many kills as possible. It’s set in a simplistic neon world with a wireframe aesthetic, but what’s coolest about GTTOD is its addictivity. Movement seems absolutely crazy, with an emphasization on dodging, shooting and sprinting at the right times to maximize efficiency. This definitely seems like a game I could get stuck playing for hours just to beat my previous high score. GTTOD is available in early access on Steam right now. –– Mohammad Tabarl

Did you ever want to play a game with the cutesy 16-bit sprites of old-school RPGs but with the horror of Bloodborne? Well, you’ll have your chance with Morbid: The Seven Acolytes. Created by developer Still Running, Morbid is a top-down action-RPG that tasks you with slaying seven Acolytes. As you track down your prey, you’ll encounter a number of ungodly horrors that will test the protagonist’s skill and hold on their sanity. –– Sherri L. Smith

Maid of Sker is a first person horror game taking place within a gigantic hotel home to creepy creatures with sacks on their head. It takes inspiration from Victorian concepts and themes, giving the player access to some futuristic equipment to escape and fight back against the horde infecting the hotel. What’s most striking about the game is its art direction, as just within the trailer, we were shown a handful of unique and memorable locations. And thankfully, there’s going to be a harder difficulty settings, giving fans of survival horror a more hardcore way to play the game. Maid of Sker is set to release in July of this year, so keep an eye out. –– Mohammad Tabari

In an alternate history where World War II resulted in Europe turning into a post-apocalyptic nightmare, the game will have players traverse the aftermath of this god-awful reality. This ghastly horror experience will be seen through the eyes of a 12 year boy who finds himself exploring the insides of a bunker to come to terms with personal trauma. It mostly seems like the game will be about solving puzzles and attempting to navigate an overwhelming labyrinth. What’s most exciting about Paradise Lost is to see what secrets lies within this world and what that might mean for the main character. Paradise Lost will be available sometime this year. –– Mohammad Tabari