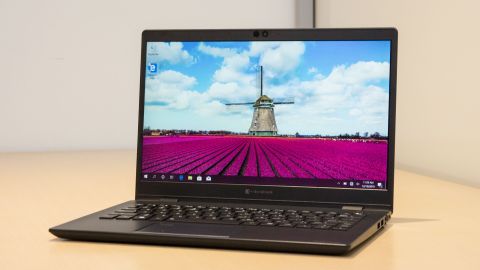 Do you remember Toshiba? Well, the former laptop maker lives on as Dynabook, and the new company just revealed a laptop at CES 2020 that should be on your radar.

The Dynabook Portégé X30L is an impossibly lightweight 13-inch laptop that weighs a measly 1.9 pounds. That makes it the world's lightest 13.3-inch laptop with 10th Gen processors, according to Dynabook

The Portégé X30 has the potential to make a splash in the market but it will need to prove itself against the likes of the ThinkPad X1 Carbon.

The Portégé X30L will be available in February starting at $1,599.

The Portégé X30L has a straightforward design that benefits from a pop of dark, Onyx Blue color and silver accents. There are two things that stand out about the Portégé X30L: its security features and how ridiculously lightweight it is.

At 1.9 pounds, the Portégé X30L is one of the lightest 13-inch laptops ever. It is so lightweight that I jokingly asked the Dynabook rep if he had mistakenly brought a hollow prop instead of the real thing. It was hard for me to grasp that the featherweight laptop I was holding not only had the components to run Windows 10 but that there was a 42Wh battery inside.

Despite its weight, the Portégé X30L is quite durable and its magnesium-alloy chassis is rated to MIL-STD-810G standards. That means it can withstand drops, high temperatures, humidity and dust.

When it comes to security, the Portégé X30L gives you the option to login with either a fingerprint sensor or IR camera via Windows Hello. On the side of the machine is a TPM 2.0 chip, which makes sure passwords are encrypted. For more peace of mind, Dynabook is including a generous three-year warranty with the Portégé X30L that includes phone support and carry-in and on-site repairs.

The Portégé X30L is a thin laptop (0.7 inches) but still has room for an extensive selection of ports. Those include two USB 3.2 Type-A ports, a USB Type-C input, an HDMI port, a microSD card slot and a headphone/mic jack. There is also an RJ45 Ethernet port for fast, stable internet connectivity.

The Portégé X30L will be sold with three different display options, each of which is 13.3 inches. We recommend skipping the 1366 x 786-pixel panel. In fact, we feel strongly that those low-res screens should be abandoned altogether.

Instead, go with either of the two 1080p options. If you need touch support, there is a 1080p touchscreen display that gets up to 300 nits of brightness. If not, save some battery life and go with the non-touch option, which goes up to 470 nits.

The display looked great from what I could tell in the brief time I had with the device. Colors were punchy and the screen was definitely bright enough to view in a well-lit office room. We'll have to do more testing when we get a unit in for review, but so far so good.

Like most business laptops, the Portégé X30L can be configured with a wide range of components.

The Portégé X30L's battery life is rated at 14.5 hours, based on the MobileMark 2014 benchmark. These tests are usually a poor indicator of real-world battery life, so we'll be sure to do our own benchmarks when we get in a review unit.

Laptops have become much lighter over the past few years but they rarely fall into the sub-2 pound category. As one that does, the Portégé X30L is among the most portable business laptops ever. On top of that, this featherweight machine was tested to military-grade durability, making it both nimble and tough.

Being the lightest in its class is a good start, but the Portégé X30L still has a lot to prove if it's going to help Dynabook reach the heights Toshiba couldn't. We'll be sure to post a full review of the Portégé X30L and let you know how it stacks up against the competition.

For more laptops, tablets and more, stay tuned to our CES 2020 hub page.