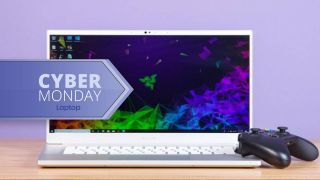 With Cyber Monday upon us, now is a great time to look for a laptop that has what it takes to smoothly run your favorite games. We're seeing massive Cyber Monday gaming laptop deals from brands like Asus, MSI, Alienware and Razer this Cyber Monday and the deals are just rolling in.

We're keeping track of the latest Cyber Monday deals on Amazon, Dell, Best Buy, Microsoft and Walmart, and are adding the steepest discounts to the list below.

Before you add anything to your cart, make sure you know which ingredients make for a good gaming laptop. As a quick refresher, the most powerful gaming laptops pack either an Intel Core i7 or Core i9 CPU and a 20-series Nvidia RTX discrete graphics card. For faster refresh rates and better battery life, we generally recommend going with a 1080p display. Also, if you like a good light show, make sure the gaming laptop you buy has an RGB-backlit keyboard.

Keeping that in mind, here are the best Cyber Monday gaming laptop deals.

Razer Blade 15 (RTX 2070): was $2,599 now $2,247
If you want a premium laptop on top of a powerful gaming rig, then the Blade 15 is the laptop to buy. In our Razer Blade 15 review, we praised the laptop for its strong performance and long battery life.View Deal

Gigabyte Aero 15: was $2,399, now $1,999
The Gigabyte Aero 15 is stacked! Equipped with an 8th Gen Core i7 processor, Nvidia RTX 2070 and 1TB of storage. And it's slim and light enough to be easily stored in a large purse or medium-sized backpack. It's ideal for work, play and everything in between. View Deal

Asus TUF Gaming Laptop: was $1,359 now $824
The Asus TUF Gaming Laptop is almost half off right now on Amazon. The notebook has an AMD Ryzen 7 3750H CPU with an Nvidia GeForce GTX 1650 and a 512GB SSD. It's more than capable of delivering great frame rates when gaming. View Deal

Asus ROG Strix Scar II: was $1,999 now $1,399
The Asus ROG Strix Scar II might have an 8th Gen Core i7 processor, but it also has a Nvidia RTX 2070 GPU, which is plenty powerful. Throw in a gorgeous 1080p 144Hz display and an aggressive, yet relatively lightweight design and you've got a winner on the gaming and budget front. View Deal

Lenovo Legion Y545: was $1,099 now $849
Looking for a gaming laptop that serves up plenty of power and can fit in at a LAN party or an office meeting? Look no further than the Lenovo Legion Y545 and its 9th Gen Core i7 CPU and Nvidia GTX 1650. It's a great choice for play and work.View Deal