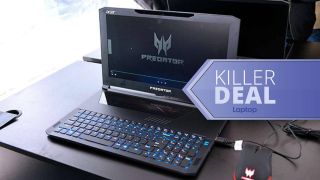 A good gaming laptop can easily set you back at least $1,500. Fortunately, excellent gaming deals such as this one from Amazon are here to offer your wallet some relief.

Design-wise, the Triton 700's touchpad has been upended to the top of the keyboard deck and transformed into a peek-a-boo panel. In order to make room for the flashy design, the keyboard has also been pushed down the deck, eliminating the palm rest.  As a result, you'll want to plug in a mouse if you need to gets serious work done. If that's not enough bells and whistles, the laptop also features a backlit mechanical keyboard.

Deals this steep are pretty rare, so make sure to get this gaming laptop on sale while you can.