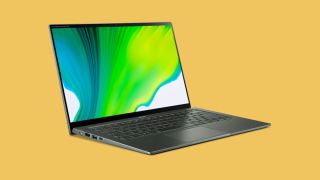 Acer's weightless Swift 5 laptop is finally getting updated with optional discrete graphics. Revealed at the annual Next@Acer event, the new Swift 5 has reduced bezels for a 90% screen-to-body ratio, a touchscreen with antimicrobial Gorilla Glass, and a new mist green color variant.

We aren't being told the specific CPU inside Swift 5, only that it is a "next-gen Intel Core" processor that uses graphics based on the new Xe architecture. This, of course, is referring to Intel's upcoming Tiger Lake CPUs, which should bring significant improvements to graphics performance.

I reviewed the previous Swift 5 a few months ago and was impressed by its long battery life and ultraportable chassis. With a few minor adjustments, the Swift 5 could be a legitimate contender against our top picks, like the Lenovo ThinkPad X1 Carbon and Dell XPS 13. Let's take a closer look at this upcoming model to see if Acer made the right changes.

The Acer Swift 5 will go on sale in North America in October at a price of $999.

The Swift 5 comes in two unique colors, Swift Green and Safari Gold, both of which flaunt gold accents.

At 0.6 inches, it's pretty thin for being a 14-inch laptop. Even more impressive is how the magnesium-lithium and magnesium-aluminum materials keep the weight at just 2.2 pounds. That's the same heft as the previous version, which I noted gave me a "bizarre feeling that what I'm holding can't possibly weigh so little."

I haven't seen the new version in person, but based on photos Acer sent us, it looks very similar to the previous model apart from the new color options. It has a simple, sleek shape that lets you appreciate the eye-catching hues. New this year is a drop hinge, which elevates the deck for a more comfortable typing experience and improved airflow. It works well but, in our experience, can make the laptop uncomfortable to use on your lap.

You get a USB-C port, Thunderbolt 3 and USB 3.2 Type-A inputs for connecting legacy peripherals. The Swift 5 also supports Wi-Fi 6 and Bluetooth 5. There is no IR camera but a fingerprint reader should make it easier to log in to the device.

Open the lid and you'll find a 14-inch, 1080p display with a maximum brightness of 300 nits. We hope the screen can hit that peak luminescence because anything under 300 nits is considered dim on a premium notebook. We'll do our benchmarks once we receive a review unit. Until then, Acer says the display covers 72% of the NTSC color gamut.

Covering the screen is a layer of antimicrobial Corning Gorilla Glass. With coronavirus still active across much of the world, it is crucial that we keep gadgets clean of potentially harmful substances. Acer says the coating it puts on the screen will reduce the growth of odor and stain-causing microorganisms, and that customers will have the option of putting it on the touchpad, keyboard and "all covers of the device."

Acer is keeping things pretty vague until Intel officially reveals its upcoming chips. We know the Swift 5 will be powered by a "next-gen" Intel Core CPU with Xe graphics, which suggests these are Intel's long-anticipated Tiger Lake chips.

Tiger Lake is Intel's second shot at a 10-nanometer chip after the Ice Lake CPUs it launched alongside 14nm Comet Lake chips. The biggest advantage of Ice Lake is its improved integrated graphics, which Tiger Lake promises to take to the next level by using the new Xe architecture.

Looking past the CPU, the Swift 5 will come with up to 16GB of RAM and up to a 1TB SSD. There is an optional Nvidia GeForce MX350 GPU if the Xe integrated graphics still aren't cutting it for you.

Acer gave us a nonspecific "all-day" battery life rating, which suggests around 12 hours of real-world use. The previous model endured for just over 9 hours on a charge, so I'd suspect around the same runtime on this new version.