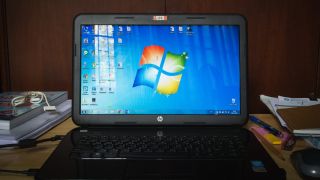 Microsoft officially ended support for Windows 7 earlier this month. Or, at least, we thought it did. The company has decided to release one last (for now) update in order to fix a bug created by what should have been the final update.

That update, KB4534310, caused the desktop wallpaper in Windows 7 to turn black when set to Stretch. Microsoft was originally going to roll out a patch only to customers and organizations who purchased Windows 7 Extended Security Updates but later changed its mind and decided to make the fix available to everyone.

"We are working on a resolution and will provide an update in an upcoming release, which will be released to all customers running Windows 7 and Windows Server 2008 R2 SP1," Microsoft wrote in the "Known issues" section of its KB4534310 release notes.

This is a huge embarrassment for Microsoft at a time when the tech giant can't seem to catch a break; The company promised months ago that it would pull the plug on Windows 7 on Jan 14. When that date arrived, eulogies were written for the operating system, which we all thought had breathed its last breath. And yet, thanks to another Microsoft slipup (see here, here and here for more), Windows 7 has been resurrected.

We're not criticizing Microsoft for fixing a bug that would plague Windows 7 users if the company had chosen to abandon the operating system. But Microsoft has time and again released unfinished updates that end up breaking more things than they fix.

We hope, at this point, that you've already made the switch from Windows 7 to Windows 10. If you haven't, read our guide on how to upgrade.

Microsoft will eventually stop pushing out updates to Windows 7, and when that time comes, the operating system will be left vulnerable to any festering security flaws or bugs. Windows 10, on the other hand, is being regularly updated with patches and new features.

If you're a business user who needs Windows 7 to run legacy software, anticipate a fix for the wallpaper issue in mid-February. If you need further support, Microsoft sells Extended Security Updates, or ESUs, for about $25 to $50 per system.

How to fix the wallpaper issue today

There are ways to bypass the wallpaper bug if you can't wait a few weeks for Microsoft to release a fix.

The bug only affects the "Stretch" wallpaper setting, so the easiest solution is to set your background to either "Fill, Fit, Tile or Center."

To do so, right-click on your background and select Personalize>Desktop Background.