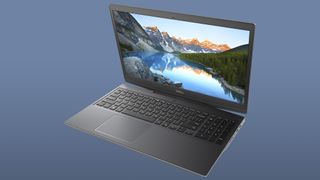 Dell's G5 15 SE, one of the best gaming laptops of 2019, is getting treated with AMD's new processors and graphics cards.

We haven't gotten the chance to see the G5 15 SE in person yet, but the white chassis looks sleek and attractive in photos provided by Dell. I really liked the understated aesthetics of the previous model and this new version seems to take the same footprint and improve upon it.

On the black deck of the G5 15 SE is a WASD 4-zone backlit keyboard that can be customized through the Alienware Command Center.

We should get some hands-on time with the G5 15 SE before CES 2020 ends. If so, we'll update this article with hands-on impressions.

The G5 15 SE has a 15.6-inch, 1080p display with a 144Hz refresh rate and AMD FreeSync technology. That means fast-paced action will look smooth when you play a first-person shooter and you shouldn't encounter any screen-tearing.

I loved how vivid the display was on last year's G5 15 SE, so I'm hoping for more of the same on this AMD version.

Most intriguing about the G5 15 SE is that it comes equipped with AMD's new Ryzen 400-series H-mobile processors and Radeon RX 5600M graphics card.

These components were announced at CES 2020, so we haven't tested them yet. We will update this article when we know more.

What we do know is that the processor and graphics card work in tandem with AMD SmartShift technology to dynamically shift power between the CPU and GPU to improve performance. On the gaming side, AMD's Radeon software will automatically regulate framerates, reduce latency and sharpen images, according to Dell.

We'll need to test these features once we get a G5 15 SE review unit to see if they make any concrete impact on the laptop's gaming capabilities.

The Dell G5 15 with an Intel GPU and Nvidia graphics was one of the best affordable gaming laptops of 2019. If Dell kept everything we liked about that machine, and AMD's new components are up to the task, then this new version could be a home run. Especially with that sub-$1,000 starting price.