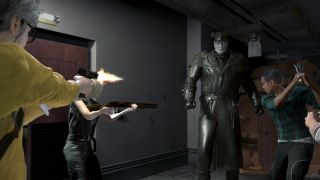 The Resident Evil Resistance PC open beta is going live on Steam today, March 27, at 1p.m. ET and will continue through April 2. The game will take up a little over 10GB of space, so it should be a quick download.

You may ask "Wait, what's Resident Evil Resistance?" It's a 4 vs. 1 asymmetrical multiplayer game that comes with Resident Evil 3. You can play as either one of the four Survivors, struggling to escape waves of zombies and Tyrants by getting past time-sensitive puzzles, or you can play as a Mastermind -- an evil person who sends said zombies and Tyrants after the survivors.

I got to play Resident Evil Resistance at New York Comic Con back in October 2019 and it was a lot of fun. The Laptop Mag staff ended up getting its butt kicked multiple times by the Mastermind. We quickly learned that success relies on there being a lot of communication involved. You also need to balance your skills and abilities with everyone else's and be judicious with your ammo.

Capcom also recently dropped a Resident Evil 3 trailer focusing on Jill Valentine. It revealed that she would be a playable character in Resident Evil Resistance, which is awesome. Unfortunately, you can't double up on characters in a match, so you'll need to be quick if you want to select her before anyone else does. It's unclear whether or not she'll appear in the beta. However, Capcom stated that she'll be added as a Survivor in a future title update.

If you own an Xbox One or PS4, you can download the beta right now. We're looking forward to getting some time in the beta this weekend. Stay tuned for our upcoming review of both Resident Evil 3 and Resident Evil Resistance.