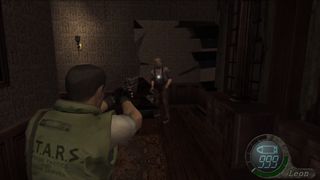 But now the mod is almost ready for release, and Mr. Curious got YouTuber, Residence of Evil, to playtest for them.

From what you can see in the gameplay video, Resident Evil 1 plays exactly like Resident Evil 4. Now you get to see all of your favorite moments from a third-person, over-the-shoulder perspective and don't have to deal with wonky camera angles or aiming.

What you'll notice right away as well is that the beginning of the game gives you three AI-controlled teammates -- including Barry, Wesker and Jill (Chris, if you're playing as Jill). However, they don't stick around for long.

If you've already played Resident Evil 1 more times than you'd care to admit, don't worry. Not only will the gameplay be different, but some item locations have changed as well. And now you can run around smashing boxes and pots with your knife, and even shooting objects from high locations.

You can now manage all of your items in an RE4-style suitcase -- thankfully, ink ribbons don't take up any inventory space. The nice little cherry on top of all of this is that you can get weapon upgrades, which is badass.

I've tried and failed on getting into the original Resident Evil many times. I think the only way I'd be able to withstand it is via this exact mod, so when it comes out, you best believe I'll be playing it. However, it's unclear when this mod will officially release, so stay tuned for when that happens.