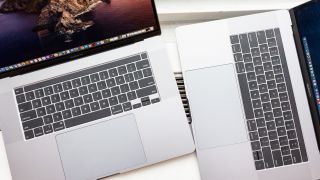 We've been complaining about the butterfly MacBook keyboard for years, but you don't have to take our word for it. Director, actor and comedian Taika Waititi went on a hilarious tangent at the Oscars last night, slamming Apple's keyboards and threatening to go back to PC.

So distraught by Apple's unreliable and uncomfortable Butterfly keyboard, Waititi used the spotlight he gained from winning the Oscar for Best Adapted Screenplay to advocate for more key travel.

The inspiring speech was undoubtedly bizarre, but not out of character for the charismatic funnyman who directed Jojo Rabbit, a Nazi-satire nominated for Best Picture (and the award goes to...Parasite).

You can see the full clip below via Variety.

Taika Waititi jokes about what writers should be asking for in the next round of talks with producers: “Apple needs to fix those keyboards. They are impossible to write on. They’ve gotten worse. It makes me want to go back to PCs” #Oscars pic.twitter.com/vlFTSjCfZmFebruary 10, 2020

When asked by a member of the press about writers' needs, Waititi, without skipping a beat, gives sage advice to the world's biggest tech company: "Apple needs to fix those keyboards. They are impossible to write on. They've gotten worse."

Having already gotten the point across, Waititi, unable to contain his offbeat New Zealand wit, continued with a full-on review, "Makes me want to go back to PCs. Because PC keyboards, the bounce-back on our fingers is way better... It's a way better keyboard."

He then asked the crowd who uses PCs before getting to the heart of the issue: the newer the keyboard, the worse it is.

“I’ve got some shoulder problems,” Waititi continued. “I’ve got OOS — I don’t know what you call it over here, this sort of thing here, that tendon which goes down your forearm down into the thumb? You know what I’m talking about, if you guys are ever writing. And what happens is you open the laptop and you're like this [hunches over] — we’ve just got to fix those keyboards. The WGA needs to step in and actually do something.”

In Apple's defense, the keyboard on the latest 16-inch MacBook Pro is much better than the Butterfly keyboard on the other models. It's still nowhere near as good as the best PC keyboards, but it does have some of that "bounce back" Waititi is looking for.

Better Mac keyboards might not have been the most important thing advocated for at last night's Oscars (that goes to gender equality and animal rights, among others) but we hope Waititi's impassioned plea doesn't go unanswered. After all, how will Waititi create another Thor: Rognoruk or Hunt for the Wilderpeople without a useable keyboard?