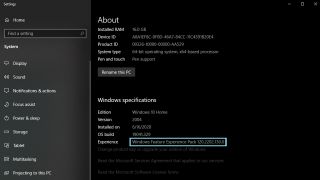 After the Windows 10 version 2004 update, something called the "Windows Feature Experience Pack" is mysteriously appearing under the "Specifications" section of the "About your PC" settings menu. However, there has been little confirmation as to what it's actually doing. Microsoft has not provided any official comments hinting at the reason for its existence, but we have a few ideas.

On Microsoft's official "Available Features on Demand" website, the "Windows Feature Experience Pack" is listed there. Unfortunately, this also doesn't provide much of a clue as to why it exists. All we see here is a warning that informs readers not to remove it because it "includes features critical to Windows functionality."

However, a primary belief for what this actually does is to give Microsoft the ability to update core software components through the Microsoft Store without having to go through the trouble of updating the entirety of Windows 10. This is useful for when Microsoft intends to make small changes to certain features and applications, allowing them to quickly roll out fixes and updates.

There's also been speculation for quite some time that Microsoft has been planning to separate the Windows 10 UI and UX from the actual operating system itself. This would allow a "lite" version of Windows 10 to exist for testing functionality on varying types of hardware.

If either of these possibilities is true, it's hard to imagine why Microsoft wouldn't be upfront about the usefulness of this feature. It seems like something Windows 10 users would be happy about, as it would reduce the frequency of updates to the operating system.