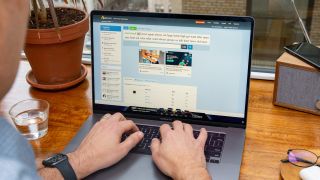 It has been almost 3 years since Face ID debuted on the iPhone X and we've been wondering when the technology would arrive on Apple laptops and desktops ever since. Now a recent Apple patent filing indicates that they are perhaps closer to a release (via AppleInsider).

The patent is a bit cryptic as always, but it clearly details a sensor in the lid of a laptop that detects and identifies the userm and the patent images reveal both a MacBook and iMac with integrated sensors.

Don't worry iMac fans, you aren't being ignored completely; The patent has a couple of images of an all-in-one desktop as well, but if you thought you caught a glimpse of a notch in the image above then you won't be able to miss it on this one.

There are also several references to a notch housing the sensor in the patent filing itself. Now, before you panic that Apple is planning to add a notch to the MacBooks and iMacs, the patent clearly states that the drawings are not meant to be indicative of final design, so safe to assume that the MacBook and iMac will follow the iPad Pro and successfully add Face ID without a notch.