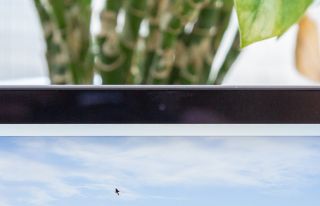 MacBooks lack the camera-hiding features found on some Windows laptops, and now Apple doesn't want you to use a third-party webcam cover, either.

The company published an advisory earlier this month urging users not to use any form of webcam cover because the "clearance between the display and keyboard is designed to very tight tolerances."

"Covering the built-in camera might also interfere with the ambient light sensor and prevent features like automatic brightness and True Tone from working," Apple added.

While that sounds like a reasonable explanation, it certainly limits the options MacBook owners have of ensuring that they aren't being spied on. Spotted by MacRumors, the advisory says to use the camera indicator — the small LED light next to the lens — to determine if the webcam is on or off. When it glows green, the camera is on.

Apple says to trust the tiny indicator, but that will feel like a hollow promise to the privacy-concerned users who cover their webcams. While there are no reports of it happening to MacBooks, it's not entirely unfeasible for a bad actor to take control of your laptop and disable the indicator light.

How to protect yourself from webcam spying

You have a few options if the camera staring at you from above your MacBook's display puts you on edge. As always, the first line of defense is to download antivirus software. Next, choose which apps have access to your camera. Apps must gain your permission before they can use your webcam, and you can always revoke or grant access to programs in System Preferences.

Are you still worried? Apple has a few guidelines to follow if you need physical evidence that your webcam is covered:

If you're a high-risk target like a government worker or celebrity, then you might consider abandoning Apple and jumping to Windows. Certain Windows 10 laptops, including most new business laptops, have a physical mechanism for covering the webcam.

Laptops like the Lenovo ThinkPad X1 Carbon and Dell Latitude 5400 use a webcam cover that you can slide over the lens, while other models, like the HP Spectre x360 13, have a kill switch that cuts power to the camera. HP's new $800 Envy x360 13 slides a white shield over the webcam when you tap on the disable video key.

We hope Apple includes one of these solutions when it launches the first MacBook with custom ARM-based CPUs later this year.