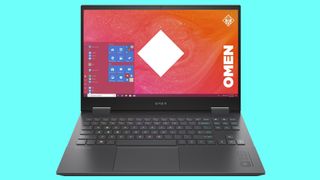 From the XPS 15 and XPS 17 to now the HP Omen 15, this has been a week filled with revealing laptop leaks.

The Omen 15 was spotted by Reddit user u/Sil3ncedsw0rd (via Videocardz) on the HP UK website before being removed. The product listing gives us a full rundown of the upcoming gaming laptop, from its unique CPU/GPU combo to its sleek and stylish design.

Here is everything we know about the HP Omen 15 from this latest all-telling product leak.

We haven't seen the new Omen 15 in person but the images posted to the HP UK website show that it has a much more modern chassis than the previous version. HP ditched the angular, gamer aesthetic and blood-red color scheme for a more elegant if ordinary design.

In my opinion, the design makes the Omen 15 seem like a traditional clamshell laptop more than a gaming notebook. With its simple lines, thin bezels and dark-gray color scheme, the Omen 15 looks like a cross between an HP Elitebook and a Lenovo Yoga. If anything, the new Omen has a similar buttoned-up appearance as Lenovo's Legion gaming machines. Design is subjective but I much prefer the new look over the bulky, garish one of the 2019 model.

The AMD/Nvidia pairing is an interesting one, but we expect to see strong performance from the Omen 15 given the scores AMD's new 4000-series processors are putting up.