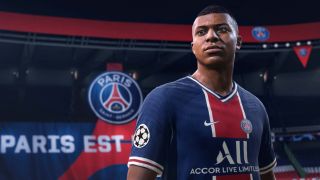 The return to the pitch will look different this year. FIFA 21, the upcoming entry to the most popular sports franchise, will be released in October, near the start of a new console generation. It will be a special entry for fans of the franchise, who will need to decide whether to buy FIFA 21 on current systems or the Xbox Series X, PS5 or PC.

Moreover, its biggest rival, PES, won't release a standalone game this year. Instead, PES 2021 is an update to PES 2020 so Konami can focus on creating a game developed from the ground up to run on PS5 and Xbox Series X. That means FIFA 21 will be the only AAA soccer game released in the calendar year. Between the console launches and reduced competition, FIFA 21 has a golden opportunity to re-establish itself as the best sports franchise around.

FIFA 20 was a return to form for the franchise thanks to the fast-paced and ever-exciting Volta street soccer mode. But other areas didn't age well, including the ho-hum Career mode, and game-breaking bugs made some frustrated players transfer to PES. Ultimate Team is still beloved by dedicated grinders, but the fundamentals of FIFA -- the gameplay and graphics --  have hit a wall in recent years.

Can FIFA 21 for current and next-gen consoles help EA out of a scoring funk? Here is everything we know about FIFA 21 (this article will be regularly updated with the latest news).

FIFA 21 will be released on October 9 on PlayStation 4, Xbox One, and PC. As per usual, FIFA 21 costs $60 on current-gen consoles (PS4, Xbox One and PC). It can be pre-ordered today at major retailers, including Best Buy and Gamestop.

If you pre-order the FIFA 21 Ultimate Edition or Champions Edition you’ll be able to play starting on October 6 (more on that later). The EA Access (PS4, Xbox One) and Origin Access (PC) Play First Trials will start on October 1.

EA hasn't announced the release date for FIFA 21 on PS5 or Xbox Series X. If FIFA 21 is a launch day release, then we'll need to wait on Microsoft and Sony for a more specific date than "Holiday 2020."

As for next-gen pricing, FIFA 21 on PS5 and Xbox Series X could cost $70 if it follows NBA 2K21, which is currently available for pre-order at $69.99. It's possible EA keeps with the traditional $60 but it does seem like next-gen games will run you $70.

Can you upgrade FIFA 21 to PS5 and Series X?

Yes, you can upgrade FIFA 21 on Xbox One and PS4 to the Series X or PS5 versions free of charge. However, there is some fine print.

FIFA 21 falls into EA's new Dual Entitlement program, which lets you upgrade an Xbox One or PS4 game once you own a next-gen console. Sounds great, right? Well, it is...mostly. For one, you can only go from the PS4 to the PS5 or from the Xbox One to the Xbox Series X, so you'll need to buy another copy if you plan to jump platforms.

EA also says you can upgrade your copy at no extra cost until the launch of FIFA 22. That seems like a pretty reasonable allowance and it's actually much more generous than the Madden 21 policy, which EA originally said needed to be redeemed by March 31. Madden's website now says it's included in the Dual Entitlement program so you can upgrade your game until Madden NFL 22 is released. We've reached out to EA for clarification.

You can upgrade a physical copy of FIFA 21 on PS4 to a physical PS5 copy. However, if you buy a discless "digital-only" console, you will need to purchase FIFA 21 digitally on current consoles.

You'll also need to be cautious about which modes you play on current consoles. Progress from FIFA 21 Ultimate Team (players, items, coins, leaderboard placement, etc) and VOLTA will transfer from the PS4 to the PS5 (and Xbox One to Xbox Series X). Unfortunately, Career Mode, Pro Clubs, Online Seasons and Co-op seasons won't go with you to the next-gen console.

What about FIFA 21 on Switch and PC?

Sorry Switch owners, this will be yet another watered-down AAA game. FIFA 21 will arrive on Nintendo Switch on October 9 but it won't be the same version coming to Xbox or PS4. Instead, the FIFA 21 on Switch is a "Legacy Edition," which means the game will have the latest squad updates and refreshed menus and overlays, but you won't get the same features and game modes found in the PS4, Xbox One and PC releases.

The PC version, which will be available for the first time on Steam, will be the same as the one on PS4 and Xbox One, not the PS5 and Xbox Series X edition. This has caused some frustration among PC gamers, although we'd be surprised if the next-gen version of the game was fundamentally different from the PC version apart from the improved visuals.

What about cross-platform play?

Will you be able to challenge friends who own a different console as you? Possibly, but probably not in FIFA 21. EA seems keen on the idea of cross-platform play for FIFA (EA's Apex Legends supports cross-platform) but hasn't committed to it.

"Allowing our players to play against each other on whichever platform they play EA SPORTS FIFA is a long-term goal of ours. At this moment we don’t have any news, but we’re continuing to investigate its integration and will share any updates when we have them." EA states on the FIFA website.

Our best look at FIFA 21 came during the EA Play event in June when a trailer was released with footage of FIFA on next-gen consoles. The clip, which is actually a mix of FIFA and Madden cutscenes, gives us a glimpse at what sports games will look like on the PS5 and Xbox Series. You can see the perspiration running down Mbappe's face as he lines up a free-kick and the curve of the ball as it finds its way into the back of the net.

It's a slick presentation but the lack of gameplay and features makes it more of a hype video than a genuine depiction of what to expect in FIFA 21.

EA has kicked around a lot of buzz words but not provided much concrete information to get excited about.

That said, PlayStation fans should be pumped about FIFA 21 because it will utilize the haptic feedback technology in the PS5's DualSense controller so you can "sense the impact of shots, passes, catches, kicks, tackles and hits."

Moreover, the PS5 and Series X versions of FIFA 21 will have "blazing fast load times" so you can go from the main menu to kick-off in "seconds."

The other major improvements are visual. What EA calls a "deferred" lighting system will make for a more realistic soccer simulation combined with improved player and stadium fidelity. EA promises greater realism in player bodies, but we'll need more evidence. Other vague promises include enhanced audio and more authentic player movements and attitudes.

You can pre-order FIFA 21 today and scores some bonus content depending on which edition you get and for which console. Below is a breakdown of all the extra content you get by pre-ordering the Standard Edition, Champions Edition, or Ultimate Edition.