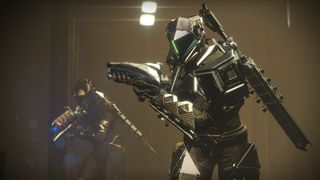 Bungie unintentionally leaked a teaser for Destiny 2’s Year 4 expansion on Instagram. Fans can expect to see more information in an official unveiling on Tuesday, June 9 at 12pm ET (9am PT). Destiny 2’s 11th season will be also starting on this same day.

The video is nowhere to be found on Destiny’s official Instagram page, so it seems Bungie revealed the teaser sooner than they wanted. However, the post itself is still accessible.

The short clip shows Eris Morn, a character originally introduced in The Taken King, struggling against a snowstorm in a frozen wasteland. Because Jupiter is largely present in the sky, many believe this to be one of the planet’s many moons, Europa. Europa has been a popular request as an explorable location since before the original Destiny released, so seeing it finally get attention is exciting.

At the end of this teaser, the website “bungie.net/reveal” is visible on the bottom left of the screen. However, this page is currently unfinished, as attempting to load it ends in a “404: Page Not Found” error. This might be where Bungie expects us to go once more information drops on June 9.

A few days prior to this leak, Bungie posted a cryptic audio file on Instagram full of low hums and ambient clatter. Many believe this to be an allusion to Destiny 2’s new rumored race, but there are many additional theories as to what it could mean.

The folks over at r/raidsecrets on Reddit have conjured up a ridiculous conspiracy theory suggesting that the 91 bars embedded within the sound file are hinting that Destiny 2’s next expansion will release 91 days after June 9th, which lines up with a Tuesday in September. Both The Taken King for Destiny 1 and Forsaken for Destiny 2 were released on Tuesdays in September. Shadowkeep was also released on a Tuesday but in October.

This could be a coincidence or perhaps Bungie added this cipher on purpose to get dedicated fans hyped.