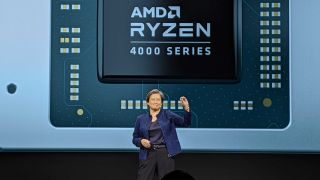 AMD unveiled today its long-awaited third-generation Ryzen 4000 processors. The new chips are based on the Zen 2 architecture, which is fabricated on 7-nanometer nodes.

The first 7nm, x86 chip ever, the new processors have eight cores and 16 threads.

AMD says the 4000-series chips will be found across all laptop form factors: U-series processors are designed for ultrathin laptops, H-series CPUs are for gaming and creators, while the Pro series is for ultrathin professional laptops.

The processors will use a new technology called SmartShift that dynamically shifts power between Ryzen CPUs and Radeon GPUs to optimize performance.

Ryzen 7 4800U CPU for ultrathin laptops

The flagship model of the new processor lineup is the 8-core, 16-thread Ryzen 7 4800U. This specific chip boosts up to 4.2GHz and has a base frequency of 1.8GHz. Those are impressive figures when you consider that power comes from a 15-watt chip.

AMD compared the Ryzen 7 4800U to Intel's Core i7-1065G7 CPU. Based on AMD's tests, the Ryzen 7 not only has better single-threaded performance, but also 90% better multi-thread performance and 28% better graphics. It even topped Intel's mobile chip in real-world scenarios, like video transcoding and editing.

If you care more about power than portability, the Ryzen 4800H has 8 cores and 16 threads and gets a clock speed of up to 4.2GHz.

AMD promises that the H-series chip offers "desktop caliber performance in a notebook processor." That is a bold statement, but the company doubled down, saying that Ryzen 7 4800H delivers faster performance than 95-watt desktop processors but at just 45 watts.

AMD claims that Ryzen 4000 chips are twice as power-efficient than the previous 3rd-Gen mobile processors, which means laptops with the AMD chips should get much longer battery life.

Which laptops will use Ryzen 4000?

AMD components haven't caught on with laptop makers, but that could change this year. The company promises over a dozen Ryzen 4000-powered laptops in the first quarter of the year, and more than 100 systems across all product categories by the end of 2020.

AMD name-dropped several laptops while it unveiled the new processors. The first laptop powered by Ryzen 4000 U-series chips is the Lenovo's Slim 7, which was announced earlier this week at CES 2020. For gamers, the H-series Ryzen 4000 chip will power Asus' ROG Zephyrus G14 when it launches in February and the Dell G5 15 SE when it goes on sale in April.