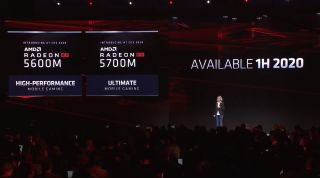 You'll see these graphics cards arrive in the best gaming laptops sometime in Q1 of 2020.

AMD claims that the new Radeon cards (the desktop version at least) took on the Nvidia GeForce GTX 1660 Ti on multiple games, including Call of Duty: Modern Warfare, The Division 2 and Gears 5.

The Radeon GPU has a decent lead over Nvidia, but these benchmarks were revealed only for the desktop versions of these products, so we're still not sure how mobile GPUs will do.

A few gaming laptops are taking advantage these new GPUs, such as the new Dell G5 SE, which is going to rock the Radeon RX 5600M GPU.