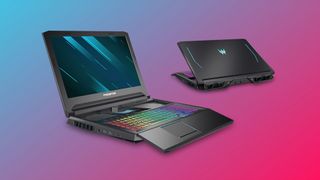 Here's everything we know so far:

You may remember the Acer Predator Helios 700 as the thick, 17.3-inch gaming laptop with a keyboard that slides out of place like some weird Transformer. The design wasn't great, but it was technically innovative in how getting the keyboard to slide back allowed for a better heating solution.

The Predator Helios 700 is getting refreshed with an Intel Core i7-10875H or Core i9-10980HK CPU and an Nvidia GeForce RTX 2070 Super or RTX 2080 Super GPU. Acer also updated the thermal solution, shoving in what they call the Predator PowerGem, which should improve the laptop's heat emission efficiency.

Acer also included a faster 2933Hz RAM, another Thunderbolt 3 port (adding up to two) and Killer DoubleShot Pro (Wi-Fi 6 AX1650i wireless and E3100G Ethernet). The display seemingly hasn't changed, which is disappointing because the last one was super dull for a premium gaming laptop.

However, the keyboard was updated with MagTek mechanical switches for the WASD keys. According to Acer, these keys are designed for racing games and feature 1.5 millimeters of keycap curvature.

The last Acer Predator Helios 300 we reviewed was actually a Special Edition model, which simply meant it had a different coat of paint. Regardless it was a decent mainstream gaming laptop.

This machine is getting refreshed with an Intel Core i5-10300H or Core i7-10875H CPU and an Nvidia GeForce RTX 2070 Max-Q GPU. It looks like an RTX Super GPU is not in the cards for this particular laptop.

It is, however, getting a new 15.6-inch, 240 Hz display with a 3-millisecond response time. It also now supports up to 32GB of 2933MHz DDR4 memory and two PCIe NVMe SSDs in RAID 0 configuration and up to a 2TB hard drive.

We haven't reviewed the Acer Predator Triton 300 before, so we can't say much about the refreshed version's predecessor. However, it will be toting power equal to its Helios sibling.

This display, however, is rated for 300 nits of brightness and 100% of the sRGB color gamut. The brightness sounds promising, but the color could definitely be better, especially if it's trying to compete with other mainstream gaming laptops.

We've reviewed many Acer Nitro laptops but never the Acer Nitro 7. This one in particular will put you at just $1,000, falling in the budget gaming laptop range, unlike the rest.

This machine is getting refreshed with an Intel Core i7-10750H processor and an Nvidia GeForce RTX 2060 GPU. I expected that there wouldn't be an RTX Super GPU in a budget gaming notebook, but it's nice to see at least an RTX GPU.

While Acer's new gaming laptops seem like simple refreshes, a tweak in performance here and there can drastically effect a laptop's score. We'll see how these new laptops hold up in our lab when they launch throughout the year.