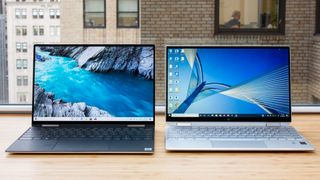 HP's Spectre x360 13 threatens to dethrone the XPS 13 2-in-1 with its stunning redesign, updated processors and long battery life. But the XPS 13 2-in-1 won't go down without a fight. Dell's laptop already has many of the features HP finally brought to the latest Spectre x360, including narrow display bezels, a compact design and 10th Gen CPUs.

That said, these two machines are evenly matched on paper. And both earned a 4.5-star rating. So which one should you buy? Read on to find out.

The Spectre x360 13 got the design update we've been waiting for. Ironically, those changes were inspired by the clamshell XPS 13, which first introduced the edge-to-edge display the new Spectre now flaunts.

The thinner bezels equate to a 90% screen-to-body ratio, which ultimately gives the Spectre x360 13 a smaller, lighter footprint than its predecessor. At 2.7 pounds and 0.7 inches, it's even lighter than the XPS 13 2-in-1 (2.9 pounds, 0.5 inches), although Dell's convertible is notably thinner.

You'll feel good about paying a premium for either of these two gorgeous laptops. The Spectre x360's design is particularly jaw-dropping. Its chrome, diamond-cut edges and angled corners glisten against the soft-silver aluminum chassis.

I prefer the Spectre's exterior aesthetics, but the XPS 13's carbon-fiber deck still has my heart. That surface has a unique weave pattern, and its soft-touch coating felt great against my palms when I was typing.

Both laptops are convertibles, which means you can flip their lids back 360 degrees and transform them into tablets. The dual hinges on the Spectre x360 and the XPS 13 2-in-1 felt sturdy in clamshell orientation and didn't require much force to rotate back into tablet mode.

With a thicker chassis and some clever engineering, the Spectre x360 13 offers a better variety of ports than the XPS 13 2-in-1.

The left side of the XPS 13 2-in-1 has a USB 3.1 Type-A port and a headphone jack. Flip it around, and you'll find two Thunderbolt 3 ports and a microSD card on the right side.

The XPS 13 2-in-1 keeps things simple. The left side of the laptop houses a Thunderbolt 3 port and a microSD card slot, while the right side includes a second Thunderbolt 3 input and a headphone/mic jack.

While I appreciate the USB-C inputs being split on each side of the XPS 13 2-in-1, the Spectre x360 13 wins for having the still-relevant USB-A port.

These are two great 13-inch displays, but you'll want to binge your favorite TV shows on the XPS 13 2-in-1.

Both screens are also colorful, but not exceptionally so. Again, the XPS 13 2-in-1's panel wins this round with sRGB coverage of 113%, compared with the Spectre x360's 109% rating. Neither is as vivid as the average premium laptop's display (121%).

I don't like that laptop makers are messing with the traditional scissor keyboard. We're seeing all sorts of new low-profile keys created to accommodate the thinnest possible laptop. It's not for me. Add 0.1 inches to the chassis's thickness, and give me a keyboard with travel.

Testing the Spectre x360's and XPS 13's keyboards side by side only reinforces that opinion. The keyboard on the HP laptop is much more comfortable to type on, thanks to its deeper travel and satisfying clickiness. In comparison, the XPS 13 2-in-1's super-shallow keys barely depress when I tap them, much like Apple's awful Butterfly switches (minus the reliability issues).

But it's not all bad news for the XPS 13. The keys don't require as much force to actuate compared with the Spectre x360's, which felt sluggish and even slowed down my fingers.

The keys on both laptops are nicely spaced and large enough for most hands, so you won't run into problems when writing up reports or sending tweets. But if I had to choose which laptop to do those tasks on, I'd go with the Spectre.

HP improved the Spectre x360's 4.2 x 2.2-inch touchpad by replacing its Synaptics driver with superior Precision drivers. You now get the same responsiveness found in other premium laptops, including the XPS 13 2-in-1. Still, my preference lies with Dell laptop's 4.4 x 2.6-inch surface, thanks to its plush coating.

Both systems we tested packed the latest Intel 10th Gen Core i7-1065G7 processor. This Ice Lake chip offers a small bump up in performance compared with 8th Gen chips and a bigger improvement in the graphics department. Note, our Spectre x360 review unit was equipped with only 8GB of RAM, while the XPS 13 2-in-1 packed 16GB.

Our video-editing test was a different story. This time, the Spectre x360 edged out the XPS 13, converting a 4K video into 1080p resolution in 21 minutes and 13 seconds. Dell's machine needed 24 minutes and 49 seconds to complete the same task. Interestingly, neither machine beat the premium-laptop average (21:05).

The Iris Plus graphics in the XPS 13 2-in-1 and the Spectre x360 13 powered the racing game Dirt 3 at a smooth 47 frames per second. That's short of the premium-laptop average (58 fps) but better than what we're used to seeing from integrated graphics.

I recommend buying a Bluetooth speaker or a good pair of headphones instead of listening to music through either of these laptops' speakers. But if I had to choose between the two, I'd rather jam out on the Spectre x360 13.

The HP laptop's bottom-firing speakers sounded shrill at high volumes when I listened to the late Juice Wrld's "Legends," but at least they sounded clear and got loud enough to fill a medium-sized conference room. When I switched over to the XPS 13 2-in-1, the song sounded more muffled, and the bass was more anemic.

Both laptops did an outstanding job on our battery test (which involves continuous web surfing over Wi-Fi at 150 nits of brightness), especially the Spectre x360 13, which endured for 13 hours and 20 seconds. The XPS 13 2-in-1 was no slouch either, clocking in a runtime of 10 hours and 57 seconds. Both crushed the premium-laptop average (8:46).

The HP Spectre x360 separated itself from its excellent rival by offering a USB-A port, a more comfortable keyboard and longer battery life, all at a lower price. But don't dismiss the Dell XPS 13 2-in-1 just because it fell in this round. Dell's flagship convertible is thinner than the Spectre x360 and has a brighter and larger display.

Ultimately, the best laptop for you depends on what you value most, but we'd choose the Spectre x360.