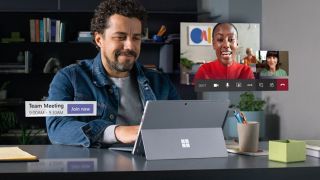 The dramatic rise in remote workers during the coronavirus pandemic has forced many offices to either adopt or dramatically increase their usage of collaboration tools. As a result, finding the best video conferencing apps and software has become of paramount importance.

Two of the most prominent players in this space are Zoom and Microsoft Teams, both of which have enjoyed success prior to this year, and are now experiencing exponential growth due to the current conditions.

There are strengths and weaknesses for each service, so let’s take a careful look at how each one performs in five critical categories to determine which might be the right solution for you or your business.

Zoom vs. Microsoft Teams: Interface and ease of use

Ease of use is a huge factor given the vast number of workers who are now being exposed to these tools for the first time. Both of these apps, to their credit, feature a modern design that is easy to parse and navigate.

Zoom does have a fairly significant advantage in this area simply because it is trying to do considerably less than Microsoft Teams. Zoom greets you with a simple menu that is designed to quickly get you either to your meeting or to help you create a spontaneous or scheduled meeting.

Once in a meeting, Zoom offers a variety of different ways to display participants and includes reasonably robust screen sharing, chat, and collaboration tools for the presenter and participants. The presenter has extensive controls over who can talk or who will appear on camera.

Winner: Zoom. Microsoft Teams didn’t have much of a chance here, both products are quite straightforward to use, but the sheer volume of options and add-ons available as part of Microsoft Teams make it the more complicated product to use.

Both services hit it out of the park in this category, with broad support for most operating systems.

Zoom is available on Windows, macOS, Linux, Chrome OS, iOS, and Android. There are some limitations, but users are also able to join simply via a web browser as long as they are logged into a Zoom account.

Microsoft Teams has an identical lineup of platforms with Windows, macOS, Linux, Chrome OS, iOS, and Android. And again, users are able to join from a number of different web browsers, with full feature support on Microsoft Edge (Chromium-based) and Google Chrome.

Winner: Draw. Both services offer extensive support across all of the most popular operating systems -- both mobile and desktop -- so no one should be choosing either one based on platform support alone.

Depending on the size of your business or your specific needs, the upper limit of video participants may be largely irrelevant to you, but for those working with large remote teams, it is nice to get everyone together for a group chat.

It’s hard to imagine 49 simultaneous video participants being necessary, but it’s hard to argue against having the functionality just in case you do need it someday.

Microsoft Teams was, until recently, limited to just four simultaneous video feeds, but an update that is currently rolling out as of this article has increased that total to a much more reasonable nine members. Additionally, you are only able to initiate a video call when there are 20 or fewer people participating in a chat; the service will only display the most recent nine who have spoken.

You can, however, host calls on Microsoft Teams for up to 250 people, which will allow for both screen sharing from the presenter as well as call recording.

Winner: Zoom. Zoom is, again, the easy winner in this category with support for a vastly higher number of video (and audio) participants.

If you have been following along with our coverage, this one may have caused you to actually laugh out loud as Zoom’s security woes have been substantial and well-documented both before and after its current surge in users.

With that said, Zoom instituted a 90-day feature freeze back in early April to exclusively work on fixing the security issues for the service. This has included a security-focused 5.0 update, an all security steps to fix “Zoomboming,” and an acquisition to solve its end-to-end encryption problem.

All of this has yielded positive results and the service has since had its ban by the New York City school district lifted. But it still has a ways to go to earn back the trust of some users, and until it delivers true end-to-end encryption, it won’t be a viable option for certain high-risk businesses.

As a product from a massive company that is used to dealing with the security implications of its software, it shouldn’t be surprising that Microsoft Teams has a much better security track record than Zoom.

Microsoft Teams has used full end-to-end encryption since its rollout with encryption of your data (video, audio, and desktop sharing data) in transit and at rest.

Teams also includes much more robust tools for hosts to manage participants with controls over who can post or share content, who is allowed into Teams rooms either directly or via a lobby system, and AI monitoring of Teams chat looking for evidence of harassment.

Winner: Microsoft Teams. Zoom is certainly doing the work to correct its security flaws, but there’s no question that Microsoft Teams is presently the more secure option.

Zoom has a reasonably robust free tier that will allow you to hold an unlimited number of group meetings for up to 40 minutes at a time with most major features offered by the service. Following the most recent update, this will include a lobby for allowing users into meetings, and passwords for meeting rooms by default.

The Pro plan, which is $14.99 a month, should be sufficient for most small businesses as it adds support for unlimited meetings of up to 24 hours in length, gives you user management, reporting, custom meeting IDs, and up to 1GB of MP4 cloud recording of your meetings (to name a few features).

Teams has a recently expanded free offering which delivers much of the same functionality for those who do not have a Microsoft 365 account. Alternatively, (as a result of the coronavirus) you can also get a 6-month free trial of the paid version for free. The free version normally includes unlimited chat, group audio or video calling, and 10GB of file storage for your team.

Winner: Microsoft Teams. Even without the inclusion of the Microsoft Office apps, this tips in the favor of Teams. Factor in cloud storage and it is a considerably better value.

As I said at the outset, there are definite strengths and weaknesses for each of these services and it’s difficult to identify a clear winner between them. However, I think it is relatively easy to differentiate who will be better served by each option.

If you are exclusively looking for a video conferencing service, there is no question that Zoom is the superior option as it stands today. Both for complete novices as well as those that are looking to hold large video presentations, Zoom is going to deliver a better experience due to its ease of use and support for larger group chats.