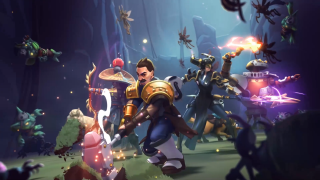 Torchlight III's latest trailer was shown at the PC Gaming Show today, but most importantly, the game received a surprise price drop on Steam in early access for $29.99.

Torchlight III is an isometric action role-playing game in the same vein as Diablo. It's the third in a critically- acclaimed series of similar games, and this latest one has been met with much hype and anticipation.

Once the latest trailer was shown at the conference, Sean "Day9" Plott interviewed the creator of Torchlight III, Max Schaefer.

In this interview, Schaefer revealed that Torchlight III will be taking place a century after the events of the previous entry. He also explained how the game will be similar mechanically to the first two iterations, but there are additional elements which will allow the player to "make their mark in the world."

One example he gave was that players can now build their own forts, decorate it in ways that "benefit your whole account" and that other players will see these forts while exploring the world.

Most importantly, however, Schaefer claims they have expanded upon the pet system, allowing them to fight alongside you, sell items you no longer need and players can now begin collecting animals out in the wild like Pokemon. Essentially, you can have a stable full of cute little critters. In the interview, we spotted dogs, cats, llamas and owls.

Torchlight III is now available in early access on Steam for $29.99.