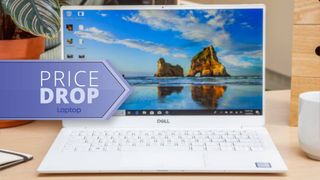 Here's an XPS 13 deal you're not likely to see again for a long time.

What makes this XPS 13 deal stand out from the rest is the configuration that's actually on sale. This model packs a 13.3-inch 1080p display, Core i5-10210U CPU, 8GB of RAM, and a 256GB SSD. It's the configuration we recommend and perfect for just about anyone.

In our Dell XP3 13 review, we loved the machine's slim design and its ability to perform well under pressure. We were also fans of the XPS 13's InfinityEdge display, which is Dell's way of saying it has ultra-thin bezels. The barely-there bezels give users more screen real estate to get their work done. And let's be honest: They also look cool.

In terms of performance, the Whiskey Lake CPU let us stream Netflix while also opening 25 additional Google Chrome tabs running either a Twitch stream, Tweetdeck, or YouTube without so much as a hiccup.

This XPS 13 deal won't survive 24 hours, so we recommend you act fast if you want an excellent laptop at absolute killer price.