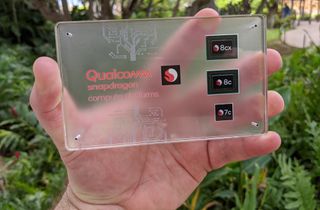 WAILEA, Hawaii — Qualcomm is broadening its lineup of modem-equipped laptop chipset with new processors designed to broaden the kinds of always-connected notebooks that are available.

A year ago at this time, Qualcomm took the wraps off the Snapdragon 8cx, a 7-nanometer chip that promised better battery life, improved performance and LTE connectivity for laptops. That chipset subsequently found its way into Samsung's Galaxy Book S in addition to other laptops, and Qualcomm has since incorporated 5G connectivity into the Snapdragon 8cx as part of its Project Limitless initiative with Lenovo to build a 5G-ready notebook by 2020.

The chipsets announced at the company's annual tech summit here today (Dec. 5) aren't aimed at such high-end laptops. Instead, the new Snapdragon 7c and 8c platforms are intended to bring always-on computing all the way down to entry-level machines.

Miguel Nunes, a senior director of product management at Qualcomm, says that all the chipsets in the company's mobile compute line will offer all-day battery life, the ability to turn on instantly, fast connectivity and security.

In a demo room showing off concept designs for the new chips, a Qualcomm rep told me that devices running on the Snapdragon 7c would be in the sub-$400 range, while it looks like the Snapdragon 8c will power $600 to $800 laptops.

It's the Snapdragon 7c that will power those entry-level devices. The chipset features an octa-core Kryo 468 CPU and Adreno 618 GPU, which should translate to a 20% performance boost over competing platforms, Qualcomm said. The chipmaker also believes its Snapdragon 7c platform can double battery life for entry-level laptops over current options. (As of the this writing, Qualcomm hasn't specified which rival chipsets it has in mind.) There's also Qualcomm's X15 modem for keeping Snapdragon 7c-powered laptops connected.

The Snapdragon 7c features Qualcomm's AI Engine, which is capable of delivering more than 5 million operations per second. (That sounds an awful lot like the performance in the Snapdragon 765 processing platform for mobile phones that Samsung also announced this week.) That should bring AI-powered experiences to even entry-level machines.

Qualcomm built the Snapdragon 8c for ultra-thin fanless machines, and the processing platform should provide multiday battery life. We're waiting to hear when this chipset or the Snapdragon 7c will find its way into laptops.