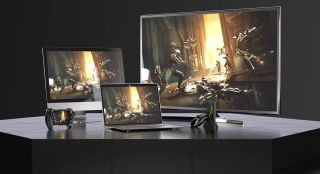 Nvidia GeForce Now subscribers will be interested in knowing that new PC games are available on the cloud gaming service. The company announced Thursday, the list of 19 new games now available to GeForce NOW subscribers.

This is welcome news as the GeForce NOW had a number Activision-Blizzard and Bethesda pulled from its list of games earlier this year due to licensing issues. As we reported, "The Long Dark" game developer, Raphal van Lierop slammed Nvidia for not requesting permission to add the game to its platform.

Nvidia promises to announce new games each Thursday and has a total of 602 games in its library so far, nearly as many as Sony's PlayStation Now. .

What is GeForce NOW?

So how much does GeForce Now cost? GeForce Now is currently available in two tiers including free and founders. Join for free and you'll have standard access and 1 hour-session lengths. Under the founders membership plan, you pay $4.99 a month for 12 months for priority access, extended session length and RTX On.

This pricing is for a limited time only.