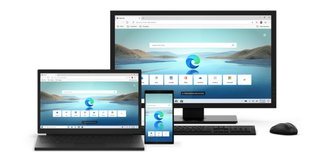 Microsoft began the process of replacing the old Edge browser with the new Chromium-based version.

On Tuesday, the company started rolling out the new Edge browser to Windows Insiders enrolled in the Release Preview ring. The new Edge will become the default browser for Insiders over the coming weeks and months, as reported by Windows Central.

If you'd like to use the new Edge browser today, you can download it on Windows 10 or macOS from microsoft.com/edge.

Otherwise, Microsoft will push the browser to macOS and Windows 10 users for installation. When you install Edge on Windows 10, your passwords, favorites and basic settings will carry over from the old version.

Additionally, your default browser will remain the same, whether it was Edge, Firefox or Chrome beforehand. And if you’re using Microsoft Edge on iOS or Android, you don’t need to do anything – your device will update automatically. Speaking of updates, Edge will get updated with new features and security measures on a six-week timeline.

Microsoft says it will start rolling out the new Edge to Windows 10 customers in "the coming weeks." After Windows Insiders receive the browser, it will get pushed out to everyone who uses a Windows PC.

That process will take time; Microsoft says the "measured roll-out approach" will happen over the next several months. Business and education users will be notably left out of the initial wave but IT admins can choose to upgrade manually. Microsoft plans for the new Edge browser to be built-in to Windows following an upcoming Feature Update.

He added, "Our goal is to make this process as simple and non-intrusive as possible to deliver a great experience, while minimizing risk to users and organizations."

Google is feeling the pressure

In our Microsoft Edge hands-on review, we dubbed the new browser a "Chrome killer" for its fast performance, useful features and the ability to easily sync with Chrome.

The new browser must be resonating with people because Google has been on the offensive lately, pushing campaigns that urge customers to use Chrome instead of Edge. It has gotten to a point where Google is using scare tactics by implying -- without evidence -- that Edge is insecure.

Google took it a step further by leveraging its platforms to aggressively entice users away from Edge and onto Chrome. We'll see if Microsoft's rival continues to apply pressure as those "hundreds of millions" of laptops get updated with the new Edge browser.