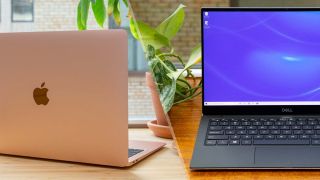 Ding, ding! We have Apple and Dell in the boxing ring!

MacBook Air 2020 is here, and it's revamped with new-and-improved features such as the beloved Magic Keyboard that was previously only available on the 16-inch MacBook Pro.

With Apple rejuvenating the MacBook Air models with provocative internals and ditching the controversial butterfly-switch keys, we can't help but wonder how the MacBook Air 2020 stacks up against our favorite overall laptop: the Dell XPS 13.

Both are excellent premium picks, but let’s watch them face off in the boxing ring of top-notch, ultraportable laptops.

The new MacBook Air is $100 cheaper than its $1,099 predecessor and starts at $999. Education users can purchase the new model for $899. As of this writing, the new MacBook Air 2020 is only available at apple.com and the Apple Store app but will arrive in third-party retail stores in the coming days.

The Dell XPS 13 starts at $949, which is in the same ballpark as MacBook Air’s pricing, but if you’re not an Education user, it will cost you $50 more.

The new MacBook Air keeps the same aluminum design that debuted in 2018, and comes in three color options: gold, silver and space gray. The gold model is the face of Apple’s MacBook Air 2020 marketing push —  and with good reason. In a sea of boring blacks, whites and grays, the MacBook Air eye-catching gold option will certainly turn heads.

The Dell XPS 13 looks elegant and refined, but according to our reviewer, the laptop’s premium aura is better felt than seen. Sporting a plush carbon-fiber deck, an anodized aluminum lid and a metal underside, the XPS 13 feels as if it’s been chiseled from the best materials Dell could dig up from the earth.

At 2.8 pounds, the 2020 MacBook Air is negligently heavier than the 2.7-pound Dell XPS 13. Both ultraportable laptops are a breeze to carry for all on-the-go professionals.

Design is very subjective, and although the Dell XPS 13 has a premium, sophisticated look and feel, the MacBook Air steals the show with its eye-catching gold finish.

The new MacBook Air is similar to its predecessor in that it has only a headphone jack and two Thunderbolt 3 ports for data transfer, charging and video output in a single connector. What’s different in the new MacBook Air 2020 is that these ports can support 6K external monitors.

Despite the XPS 13’s super-slim chassis, it’s able to sneak in two Thunderbolt 3 ports, a USB-C port, a microSD slot and a headphone jack.

The new MacBook Air juiced up its internals with a 10th-gen Intel processor and offers configurations up to a quad-core, Core i7 CPU with turbo boost speeds up to 3.8GHz. That Ice Lake CPU is paired with Intel Iris Plus integrated graphics.

Other key MacBook Air upgrades include a three-mic array (which Apple claims is on par with the mics on the 16-inch MacBook Pro and will provide better voice capture for FaceTime calls), support for an external 6K display and enhanced studio speakers for better wide-stereo sound. The Dell XPS 13's speakers are decent, but as far as we know, it doesn't sport a cool mic set up and it lacks 6K-display support.

With beefier RAM and a better graphics card out of the gate, plus more dazzling upgrades, the MacBook Air 2020 wins this round.

The Dell XPS 13 is available in 1080p and 4K resolutions. We’re sure that the new MacBook Air’s display is visually pleasing, but there are no significant screen upgrades. Plus, 4K is friggin’ awesome.

Hallelujah! Apple has turned its fans’ frowns upside down as they’ve ditched the butterfly switch keys that have plagued previous MacBook Air models. The MacBook Air 2020 now has the much-preferred Magic Keyboard that was once only available on the 16-inch MacBook Pro model.

The Dell XPS 13 hasn’t suffered from the PR disaster that Apple endured with its dreaded butterfly-switch keys. Our reviewer found the XPS 13 keyboard to be clicky and comfortable, as well as spacious since it takes up the entire deck. That way, typists won’t feel cramped when they’re plugging away at the XPS 13.

Compared to its predecessor, Apple claims that the MacBook Air 2020 features a graphics performance jump of 80% with the updated Intel Iris Plus and a CPU that’s twice as fast. We’ll have to test this in our labs, because seeing is believing.

We suspect the XPS 13 will still deliver much faster performance than the MacBook Air because it comes with Intel U-series (Comet Lake) processors instead of the low-powered Y-series chips Apple put in the Air.

However, when it comes to light gaming, we suspect the MacBook Air 2020, with its Intel Iris Plus graphics card may outdo the XPS 13 when it comes to delivering better frame rates per second.

Apple claims the MacBook Air can stay powered up for 11 hours, but we’ll have to see about that when we test the device in our lab. The tech giant has proven that it’s usually pretty spot on with its products’ advertised battery life, though; We’ve conducted a recent investigation that discovered Apple is the most honest laptop brand in terms of battery life claims, so for now, we’re putting the grain of salt away.

In our Laptop Mag battery test, which involves continuous web surfing over Wi-Fi at 150 nits, the XPS 13 only lasted 7 hours and 56 minutes. But in defense of the XPS 13, it has a power-sucking 4K display.

Fortunately, the MacBook Air 2020 fixed its notoriously stiff keys that may have caused consumers to consider other laptop options in favor of a more comfortable keyboard. With the Magic Keyboard debuting on the 2020 MacBook Air, the new Apple product could be a worthy opponent to the Dell XPS 13. However, until we get our hands on the MacBook Air ourselves, we’re holding our tongue.

The Dell XPS 13 has been Laptop Mag’s favorite laptop for a long time; its decent keyboard, premium design, zippy performance and ultraportable chassis is just too darn titillating.

The late-2019 Dell XPS 13 was upgraded with a 10th-gen processor that made the machine much better — and it was already amazing. With Apple powering up the MacBook Air 2020 with 10th-gen CPUs, we’re excited to see if the new entry-level MacBook models will experience the same performance enhancement as the XPS 13.