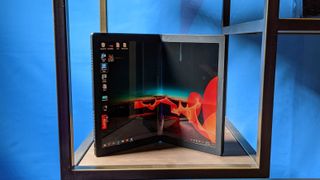 We finally have some good news for Windows 10 fans eagerly waiting to get their hands on a foldable PC. The Lenovo ThinkPad X1 Fold is still on track to arrive in 2020.

We hadn't heard much about the foldable device since we went hands-on with it in January. And with so many other devices being delayed, we began to question whether the X1 Fold would face a similar setback. Fortunately, a Lenovo spokesperson has informed us that the ThinkPad X1 Fold will be ready to ship this year.

The X1 Fold looks to be avoiding the fate of so many other devices that were originally scheduled to arrive in 2020. Yesterday we reported that Microsoft had paused production on the Surface Neo, its upcoming dual-screen device. That left the X1 Fold as the only hope of a Windows dual-screen or foldable launching this year.

One possible reason why the ThinkPad X1 Fold is still on schedule is that the tablet runs Windows 10 Pro, not Windows 10X. When Microsoft delayed Windows 10X, it set back devices relying on the OS to usher in an era of dual-screen slates and foldables.

Microsoft recently pivoted Windows 10X from an OS built for radical new designs to one for traditional single-screened devices. More recently, we've heard reports (via ZDNet) that Windows 10X has been severely delayed to spring 2021 on clamshell laptops before a full release in spring 2022.

But because the ThinkPad X1 Fold is designed for business users, and runs the full Windows 10 Pro desktop OS, Lenovo only needs to focus on getting the hardware nailed down and ready for production. Additionally, as this is the first of its kind, we don't expect the X1 Fold to be mass-produced in the same way as say, the ThinkPad X1 Carbon.

If you haven't heard of it before, the $2,499 ThinkPad X1 Fold is a 13.3-inch foldable tablet with a flexible OLED display that, when closed, looks like a leather-bound notebook. To learn more about the ThinkPad X1 Fold, check out our hands-on impressions.