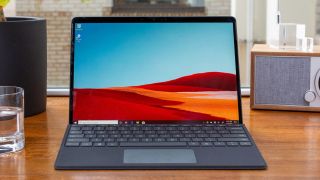 Microsoft's Surface products are no longer impossible to service. In fact, the folks at gadget tear-down site iFixit determined the Surface Pro X to be one of the most repairable tablets ever.

The high scores this 2-in-1 laptop received are in large part because of how easy it is to upgrade the Surface Pro X's SSD. All you need to do is pry open a small door on the bottom of the tablet using a SIM eject pin (or a pin or paperclip) then remove the SSD with a T3 Torx screwdriver.

With the required tools on hand, the entire process takes just a few minutes; You don't need to detach the screen from the frame or remove the battery.

Even the display is relatively easy to remove. Using a prying tool (similar to a guitar pick) and a special suction cup, the screen lifts right off, no heat required. Apart from the storage drive, most of the components you'd want to repair reside beneath the display, so we're glad Microsoft made it easier to remove the glass.

Another perk DIYers will appreciate is that all of the Surface Pro X's screws are Torx. Because of this, iFixit used only six tools during the entire teardown: T3 and T6 Torx screwdrivers, an opening tool, tweezers, a SIM card eject tool and suction cups.

The only snag iFixit hit while dismantling the tablet was with the Surface Pro X's "uberglued" battery. This thing isn't coming out, so if your battery wears down after a few years you'll need to make a trip to the Microsoft Store (and be ready to pay a fee) for a replacement.

All things considered, iFixit gave the Surface Pro X a repairability score of 6 out of 10, which makes it one of the most repairable tablets yet.

A refreshing change of pace

Previous Surface devices have been infamously difficult to upgrade. Case in point: last year's Surface Pro 6, which iFixit gave a repairability score of 1 out of 10 because of its unremovable SSD and glued-on battery.

The original Surface Laptop was even more difficult to service and scored a resounding zero, with iFixit concluding: "This laptop is not meant to be opened or repaired; you can't get inside without inflicting a lot of damage."

This year, Microsoft made it a point to craft products that are easier to upgrade and service, starting with the Surface Laptop 3 and Surface Pro X.

We hope the company continues the trend, especially because of how much it charges for upgrading storage. A Surface Pro X with a 256GB SSD costs $300 more than a 128GB SSD model. Given how easy the tablet is to upgrade, you're probably better off buying the cheaper model and swapping in your own high-capacity drive.

That being said, Microsoft doesn't want you fiddling around with its devices, no matter how easily-upgradeable they are.

The company warns against manually servicing the laptop, and says that it can only be done by a "skilled technician" (or you risk voiding the warranty). Worst yet, Microsoft's employees won't upgrade parts for you, so there is no way for you to replace the Surface Laptop 3's expensive hard drive.

As thrilled as we are about the repairability improvements made to its new Surface devices, we hope Microsoft loosens its stance so users can do so themselves.