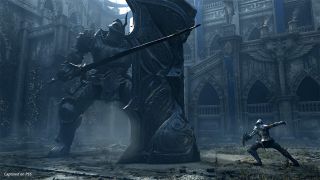 Demon’s Souls is finally getting some love with a long-awaited return to FromSoftware’s 2009 masterpiece. Bluepoint Games, the studio that handled the Shadow of the Colossus remake and Uncharted: The Nathan Drake Collection, have been tasked by Sony to develop this “re-envisioning” from the ground up exclusively for PlayStation 5.

Since FromSoftware’s Elden Ring hasn’t been seen in over a year, Demon’s Souls might be the next thing to scratch that Souls-like itch for many of us.

Here’s everything we currently know about Demon’s Souls, including its gameplay, release date, screenshots, setting, announcement trailer and something called "Fractured Mode."

Unfortunately, no release date has been revealed as of yet and we still have no clue when to expect Bluepoint’s re-imagining. This isn’t particularly surprising as the game was only just announced last month.

Keep your eyes and ears peeled for any additional information, as we’ll likely learn more about the game’s release date as we itch closer to the launch of the PlayStation 5. However, you can probably bet we won’t see Demon’s Souls released this year, as it’s unlikely that Bluepoint could have built a project of this scale from the ground up in two years with a team of about 90 people.

2009’s Demon’s Souls was revolutionary because it started the Souls-like genre, and was first in a long line of similar critically-acclaimed games developed by FromSoftware. The primary philosophies of the gameplay include strict checkpoints, complex level design, challenging boss fights, no manual saving systems, a world filled with danger at every corner, and a combat system that relies on careful strikes and well-timed dodging.

As these are the core aspects for what makes Demon’s Souls so phenomenal, it’s safe to assume that Bluepoint will be sticking to them. However, one of my biggest questions relates to how they might modernize the combat system. Will it play closer to Bloodborne and Dark Souls 3? Or do they intend to stay true to the original, as it’s far slower, less aggressive and more tactical?

Demon’s Souls feels sluggish and clunky due to its age, but if Bluepoint irons out certain kinks, it could keep the feel of the original without having to emulate the faster momentum of modern Souls games.

I'm also interested in how Bluepoint will balance the magic systems. One of Demon's Souls' biggest issues relates to certain spells being overpowered, as an ability like Firestorm can nearly one-shot a handful of bosses while a spell, like Warding, makes you nearly invincible in the face of most attacks.

Not only that, but similar to the original Dark Souls, keeping your shield up is always an incredible strategy. I managed to tank my way through some of the hardest bosses in the game just by blocking strikes, so I hope Bluepoint can take away some of its power and keep things more balanced.

One thing I'd love for Bluepoint to do with the Demon's Souls remake is to bring back an area that was cut from the original. Within the hub of the game, there's always been an Archstone that was partially shattered, never allowing the player to interact with it and enter its mysterious world.

While this may have just seemed like a tease by the developers, it was actually intended to be an area called the Land of the Giants. Dedicated fans dove deep into the game's files and have gotten a detailed look at it.

It's exciting to imagine how Bluepoint could create their own area from scratch, allowing for new bosses, weapons, items, enemies, and a world that's hopefully as memorable as the rest of the game.

In general, the most striking aspects of Demon's Souls revolve around its incredibly creative environments and how they interweave with the mechanics to allow for a terrifying experience. When traversing the quiet halls of Latria, the player will learn to fear the slightest of noises, as it could mean any one of its Lovecraftian nightmares has found them.

Or when perched upon the Shrine of Storms, players are fearful of even the most minor sight of the sky. That's because Storm Beasts are constantly lurking and waiting for the player to peek their head out so they can launch deadly spikes.

When trudging through the Valley of Defilement, players have to be careful when attacking; one misstep could result in a tumble off the edge and a swift death. And as they descend further, they'll learn to steer clear of the area's discolored liquid. It's indicative of the plagued enemies that are particularly deadly when the player can barely move.

I've never panicked more in a video game than when I first entered a cage in Latria that descended down for what felt like an eternity. Ultimately, I was released into a crimson swamp. I was already freaking out, but when I caught sight of vile centipede creatures with screaming human faces morphed into their bodies, I turned around and got out of there as fast as I could.

This is exactly the type of experience Demon's Souls is all about, one wrought with terror and panic. Hopefully, Bluepoint can modernize these emotions and not lose sight of how important it is to keep the core horror of Demon's Souls intact.

While Demon’s Souls gameplay hasn't be released, we have been graced with six screenshots that show parts from the tutorial area, the tutorial boss, Boletarian Palace and the Tower Knight boss fight.

What stands out from these screenshots is seeing the changes in tutorial area and the Boletarian Palace. In the original, these areas relied on simplistic castle designs and seemed well-kept, which clearly indicated they were being lived in by something resembling humans. However, in these re-envisioned screenshots, the castle grounds seem deserted with weeds growing between the stones and bricks that are scattered around haphazardly.

Demon’s Souls was revealed at Sony’s Future of Gaming event on June 11, where fans were treated to an incredible announcement trailer that showcased a handful of the game’s most memorable bosses and encounters. I got goosebumps the moment the familiar theme began playing and we saw the dangling corpse being hung above a ravaged world.

There are so many nostalgic moments scattered throughout the trailer, including the Storm King and his beasts soaring through the thunderous skies, the Tower Knight slamming his gigantic shield into the castle grounds, and most dangerous of all, that pesky Reaper with his horde of Shadowlurkers. It’s no exaggeration to say that I screamed in excitement when this trailer was first revealed.

When Demon's Souls was announced, Sony released a PlayStation Blog providing further details on the game. Within this blog, a specific statement talks about how the game has been "masterfully enhanced with a new 'Fractured Mode.'" Fans have been heavily contemplating what this could mean, but the best theory so far relates to a piece of cut content present in the original Demon's Souls called "True Death." The Demon's Souls Wiki describes True Death as a hardcore mode that makes failure far more severe and punishing.

As written in the Wiki, "When your HP reaches 0 in ghost form, True Death occurs. A player with a True Death has all of their gained experience reset."

It's clear why this mode might have been cut, as adding a perma-death mechanic to a game that's already incredibly difficult would have been far too risky at the time. However, now that Souls fans are desperate for an extreme challenge, Bluepoint Games could bring some form of True Death back without getting severe backlash.