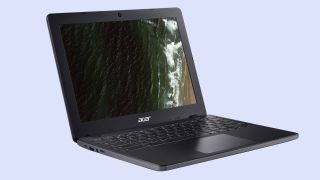 On the Windows 10 side are a pair of affordable PCs: the TravelMate Spin B3 and TravelMate B3, convertible and clamshell versions, respectively. Chromebooks are popular in the education sector so Acer is also launching a new Chromebook C871 (or Chromebook 712).

The three laptops are all affordable given that they're designed to be purchased in bulk for a classroom.

The TravelMate Spin B3 and TravelMate B3 will be available in April starting at $329 and $239, respectively. The Chromebook C871 -- also known as the Chromebook 712 --- will land in North American in March with a starting price of $329.

We'll start with the Chromebook C871 (or Chromebook 712, its retail name) because it has a feature we haven't seen in such an affordable laptop: a 3:2 aspect ratio.

The laptop's 12-inch display has a resolution of 1366 x 912-pixels. That's probably not what you were hoping for in 2020 but the screen's 3:2 aspect ratio gives students more vertical real estate to write papers or read reports. Teachers or school admin have the option to choose touch or non-touch displays.

The best thing about the Chromebook C871's design is its toughness. Rated to MIL-STD-810G standards, the C871 can withstand 132 pounds of downward force, drops from 48 inches, and moisture thanks to its reinforced hinge and shock-absorbing bumpers. Even the keyboard is rugged, with anchored keys and a spill-resistant material.

When it comes to processing power, the Chromebook C871 can be configured with an Intel Core i3-10110U processor, which should be plenty of oomph to run Chrome OS. Don't expect the same performance from the base CPU, an Intel Celeron 5205U processor.

Acer rates the Chromebook C871's battery life at 12 hours, which would be a great result if it lasts that long on our real-world benchmark.

Acer TravelMate B3 and Spin B3: Specs and features

If you prefer Windows 10, then the TravelMate B3 and Spin B3 are better options. Built for the K-12 market, this pair of affordable laptops sport an 11.6-inch display and a rugged chassis.

As a 2-in-1, the Spin B3 can flip around and convert into a tablet or you can place it in tent mode for viewing content. Better yet, the Spin B3 employs Wacom AES technology and comes with a dockable stylus for taking hand-written notes.

Both laptops also passed military-grade durability testing, so they can withstand the rigors of the classroom. The TravelMate Spin B3 and TravelMate B3 weigh just over 3 pounds so even younger kids shouldn't have problems carrying them around the classroom.

The TravelMate Spin B3 and TravelMate B3 can be configured with up to an Intel Pentium Silver N5030 processor, 8GB of RAM and 256GB of PCIe SSD storage. Battery life is rated at 12 hours for both models, but we'll have to do our own testing for more accurate real-world runtimes.