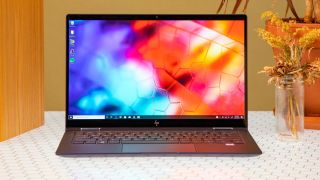 Your next PC could support 5G — and you might buy it from the same place you got your smartphone. Qualcomm announced on Tuesday that Verizon, Sprint and other major carriers will sell laptops with built-in 5G support.

Originally meant for the canceled MWC event, Qualcomm's announcement highlighted the mobile carriers that will offer 5G PCs when the emerging network finds its footing later this year.

Along with Sprint and Verizon, mobile carriers that will stock 5G laptops include EE, Swisscom and Telefonica in Europe, and other providers in the Middle East, Africa, Asia and Australia. AT&T in the US was notably missing from the bunch, although we'd be surprised if the carrier didn't join its rivals in the future.

It's no secret that the major PC vendors are adding 5G chips to their laptops. At CES 2020, Lenovo unwrapped the Yoga 5G laptop, an ultraportable device with a Snapdragon 8cx chip. Around the same time, HP revealed its second-gen Elite Dragon with 5G connectivity, and Dell's Latitude 9510 will also feature 5G for business users who need to stay connected on the go.

Qualcomm revealed its 5G X55 chipset last year for Always Connect PCs. The 5G modem can be outfitted in ARM-based and Intel-powered laptops.

5G is still in its infancy as mobile carriers grow their networks. On top of that, each 5G network looks different, with varying data speeds and ranges delivered by the carriers. As such, 5G will only be available to customers in select markets when the first 5G laptops arrive in earnest later this year.

To distract from that glaring limitation, Qualcomm demonstrated how 5G can transform the industry by delivering record-setting data speeds. On stage at its event, one executive used Lenovo's Yoga 5G to edit raw, high-res video stored in the cloud using Adobe Premiere Pro -- a demanding task typically done by workstations over a wired internet connection.

"Increasingly with 5G, we'll see speeds that are blazingly fast," Mark Linton, Microsoft's general manager for portfolio and solutions, said during Qualcomm's 5G event. "For us, there's a big opportunity where we see our PC customers be unleashed."

There are still a lot of questions surrounding 5G-connected laptops that need to be answered. For example, how much will all this data cost? Or when will mobile carriers start throttling your speeds? We're also worried about the impact of 5G on battery life, especially during the network's early, less-efficient years. Fortunately, we won't have to wait long as the first 5G laptops are expected to arrive by the end of the year.