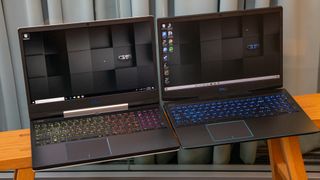 Here's how these two cheap gaming laptops stack up.

Both the Dell G3 15 and the Dell G5 15 SE sport thick, plastic chassis but stray from the usual gaudy-gamer design (red, black and RGB-ed to hell). The G3 15 has a street car-esque design with the curves on its black hood and its spoiler-shaped glossy hinge. Meanwhile, the G5 15 SE has an elegant white hood paired with a premium-looking silver hinge. Both machines are covered in blue accents.

Gaming laptops are typically great when it comes to ports, but since the Dell G5 15 SE is slightly more premium, it does have more to offer than the Dell G3 15.

In the Dolittle film trailer, the onion domes on a castle glowed gold, and some spiraled with bold blue accents on the G5 15 SE's panel. But on the G3 15's screen, the domes took me out of the film's fantastical immersion. Both machines could reveal details of the wall behind Robert Downey Jr. in a dimly lit room. And the stubble on Downey Jr.'s face was equally sharp on either display.

According to our colorimeter, the G5 15 SE's display covered a strong 154% of sRGB color gamut, which is impressive for a cheap gaming laptop. Meanwhile, the G3 15's screen hit a measly 63%, falling short of the 71% cheap gaming laptop average.

I nailed 73 words per minute on the 10fastfingers.com typing test using the G5 15 SE's keyboard, while I hit 71 wpm with the G3 15's keyboard. Overall, the G5 15 SE has the more appropriate gaming keyboard, thanks to its clickiness and RGB lighting.

Like with the graphics benchmarks, the Dell G3 15 and the Dell G5 15 SE are equally matched regarding components. Both laptops sport an Intel Core i5-9300H processor with 8GB of RAM.

The G3 15 and G5 15 SE's both offer impressive battery life for a pair of gaming laptops. After they continuously surfed the web over Wi-Fi at 150 nits of brightness, the G5 15 SE survived 6 hours and 53 minutes, while the G3 15 lasted 6 hours and 41 minutes. No matter which model you choose, you're going to get great battery life.

The Dell G3 15 and the Dell G5 15 SE both start out as bread-and-butter cheap gaming laptops, but the G5 15 SE can be configured into a premium machine.

Overall, even at the base price, it's worth getting the G5 15 SE for its bonus features, and its far more configurable.

There's a reason why Dell classifies the G5 15 SE as a step up from the G3 15, and that's because its display, keyboard, ports and design go the extra mile.

However, if you're on a tight budget, the G3 15 is an excellent choice for a cheap gaming laptop, especially considering its strong performance and graphics.

But overall, you're getting a better deal with the G5 15 SE.