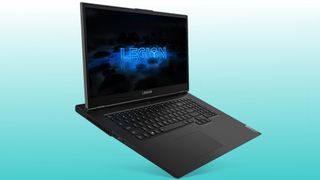 Lenovo is launching a whole new legion of... well, Legions. The new set of gaming laptops will be outfitted with new 10th Gen Intel processors, but one, in particular, will be toting around AMD's new Ryzen R7 CPU, which could give it amazing battery life.

Both laptops come in at 14.3 x 10.2 x 1 inches and 5.5 pounds, which is slightly thicker and heavier than we prefer. The Intel version also come with a new Hunter Moss Green color option, which we're excited to see (anything is better than gray or black).

These laptops are packed with four USB 3.1 ports, one USB Type-C port, an HDMI 2.0 port, an RJ45 Ethernet port and a headphone jack. We're disappointed that there is no Mini DisplayPort.

On the Intel version, you can get a display with up to 240Hz refresh rate, 100% sRGB color gamut, 500 nits of brightness with Dolby Vision-enabled and Nvidia G-Sync support.

Lenovo is introducing its new Legion TrueStrike Keyboard, which features 1.5 millimeters of key travel and a full number pad with less than a 1 millisecond response time. It also has optional four-zoned RGB Lighting with anti-oil and abrasion-resistant key coatings. Lenovo also increased the trackpad's size by 39%.

Both laptops pack a 60 Wh battery, and while Lenovo hasn't detailed the exact battery life, we imagine the Legion 5 15 (AMD) will get solid results. AMD Ryzen CPUs have shown how they can affect battery life in the Asus ROG Zephyrus G14, which lasted an unprecedented 11 hours and 32 minutes.

Like the other Legions, the Legion 5i 17 will get the company's new TrueStrike Keyboard, which we're excited to test out. However, unlike the cheaper Legions, this machine comes with an 80 Whr battery that Lenovo claims can get up to 8 hours of battery life. That would be a decent result so let's hope it's accurate.

The most premium model of the Legion is the Legion 7, a 15.6-inch laptop that's even slimmer than its siblings yet totes more power. You can get this machined configured with up to a 10th Gen Intel Core i9 CPU, an RTX 2080 Super Max-Q GPU, 32GB of RAM and a 1TB PCIe SSD.

Other features, apart from the new keyboard and touchpad, include a top-bezel webcam with a privacy shutter. And like the 17-inch Legion, this model comes with an 80 Whr battery rated for 8 hours of battery life.

Between the Legion 7, Legion 5i 15, Legion 5i 17 and Legion 5 (AMD), Laptop Mag is going to be quite busy come May 2020. We're excited to see if AMD lives up to the hype around battery life once again with the Legion 5. Only time will tell. Stay tuned to our full review and benchmarks of Lenovo's new Legions.