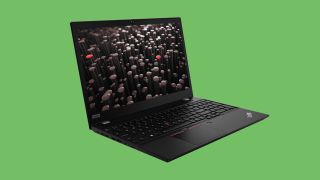 With Intel announcing its 10th Gen vPro chips yesterday, we're expecting a flurry of new business laptops to arrive. Lenovo is kicking things off by revealing the ThinkPad P14s and ThinkPad P15s. The company is also teasing some exciting new releases, including an 8th Gen ThinkPad X1 Carbon and 5th Gen Yoga.

We'll start by giving you a rundown of the ThinkPad P14s and P15s, a pair of premium business notebooks that seem like possible rivals to the MacBook Pro or XPS 15. They also have some features that make them great for creative professionals, not just number-crunching enterprise users.

Lenovo didn't give us the usually in-depth breakdown for these laptops, but there is enough info to keep us interested. P-series ThinkPad laptops are typically part of Lenovo's workstation class, which means they're pricey, powerful and meant exclusively for business users, not everyday consumers.

It will be interesting to see how Lenovo positions the ThinkPad P15s and P15s because there seems to be some overlap with the ultra-popular ThinkPad X1 Carbon and ThinkPad X1 Extreme.

With that in mind, the ThinkPad P14s, which has a 14-inch display, and the ThinkPad P15s, a 15-inch model, can be equipped with a 4K UHD panel with Dolby Vision HDR and X-Rite Pantone color calibration for accurate color reproduction. The latter feature is particularly useful for photo and video editors.

From what we can glean from images provided by Lenovo, the ThinkPad P14s and P15s have a pretty typical ThinkPad-style design with an all-black chassis and red accents. They don't appear to be as thin as the ThinkPad X1 Carbon or as handsome as the ThinkPad X1 Extreme, but this signature look and its features have proven functional over the years.

Performance shouldn't be a problem for either laptop. They both feature 10th Gen Intel Core CPUs with up to a Core i7-10810U CPU (6 cores, 12 threads) with a max frequency of 4.9Ghz. Those creative pros I mentioned earlier will appreciate the optional Nvidia Quadro graphics options, which are designed for AEC or CAD instead of gaming. Storage on both models goes up to 2TB.

Lenovo rates the battery life of these systems at 14 hours, but we'll more or less ignore that number until we conduct our own real-world testing.

In even more exciting news, Lenovo teased new versions of the ThinkPad X1 Carbon and ThinkPad X1 Yoga, two of the best business laptops around.

We don't know too much about the upcoming laptops except that they will arrive "very soon" with Intel vPro processors. Along with the X1 Carbon and X1 Yoga, Lenovo is launching new T-series, X-series and L-series laptops.